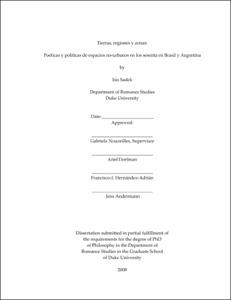 View / Download
1.2 Mb
Date
Author
Sadek, Isis
Advisor
Nouzeilles, Gabriela
Repository Usage Stats
346
views
789
downloads
Abstract
This dissertation examines the ways in which non-urban spaces were approached as objects of knowledge in Argentine and Brazilian essays, chronicles, and films in the 1960s. It is comprised of three case-studies. The first traces the role of spatial coordinates in 1960s' political imagination, reconstructed through programmes for economic modernization (developmentalist agendas and the Doctrine of National Security), through Frantz Fanon's thirdworldist understanding of political organization, and through Gunder Frank's version of Dependency theory. The second study centers upon Brazil's rural Northeast as evoked in AntÃ´nio Callado's chronicles and economist Celso Furtado's memoirs, that both simultaneously took up and challenged the terms by which developmentalism's mainly technical modernization sought to legitimate itself. The third case-study begins with the national horizon envisaged for Argentina by economist Rogelio Frigerio's apology of industrialization as an agent of social homogenization. This horizon is then contrasted with two investigations on marginal spaces: Fernando Birri's documentary film "Tire dié" and Roberto Carri's essay in which, by defining a new space, the "area of colonial capitalism," Carri brings to the fore novel forms of political action. I situate each case-study at a crossroads between developmentalist hopes and blossoming liberation movements, demonstrating how each resignifies differently national and transnational coordinates. Critical theories of space, as well as intellectual history and discourse analysis constitute my readings' methodological base, guiding my analyses of aspects that are often overlooked in studies of 1960s culture, particularly as regards the constitution of militant subjectivities and trajectories. Inspired by David Harvey and Henri Lefebvre's theories and methods, I detect the constant presence of a technified prism in the spatial imagination of modernization, be it social or economic. I argue that the descriptive activity by which these marginal spaces are produced as objects of knowledge is also poetic as it approaches these decaying spaces from the vantage of a present defined by hopes in technical modernization as an agent of progress. As such, this descriptive and poetic activity amounts to a complex political intervention that articulates such spaces in function of specific temporalities and rhythms, rethinking critically their relation to imperialism and to capitalist modernization.
Type
Dissertation
Department
Romance Studies
Subject
Literature, Latin American
Argentina
Intellectual life
Brazil
Intellectual life
th century
Brazil
Northeast
History
Marginality
Social
Argentina
Permalink
https://hdl.handle.net/10161/624
Citation
Sadek, Isis (2008). Tierras, Regiones Y Zonas: Poéticas y políticas de espacios no-urbanos en los sesenta en Brasil y Argentina. Dissertation, Duke University. Retrieved from https://hdl.handle.net/10161/624.
Collections
More Info
Show full item record