Feminine Imperial Ideals in the Caesares of Suetonius 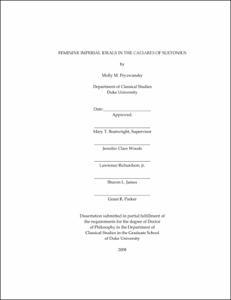 View / Download
1.2 Mb
Date
Author
Pryzwansky, Molly Magnolia
Advisor
Boatwright, Mary T
Repository Usage Stats
1,956
views
3,842
downloads
Abstract
The dissertation examines Suetonius' ideals of feminine conduct by exploring the behaviors he lauds or censures in imperial women. The approach comes from scholarship on the biographer's practice of evaluating of his male subjects against a consistent ideal. This study argues that Suetonius applies the same method to imperial women. His tendency to speak of women in standardized rubrics (ancestry, marriage, the birth of children) suggests that he has a fixed notion of model feminine behavior, one that values women for being wives and mothers. Chapter 1 argues that because Suetonius' Lives center on male subjects, his picture of women is fragmented at best. The biographer uses this fragmentation to manipulate his female characters. Livia, for instance, is cast as a "good" wife in the Augustus, but as a "bad" mother in the Tiberius. Suetonius' often inconsistent drawing of women reveals that he uses them primarily to elucidate certain aspects of their associated men. Having a "good" wife, mother, or sister reflects well on an emperor, while having a "bad" one reveals his lack of authority. Chapter 2 explores the role of mother. Atia serves as the "good," silent type and Livia and Agrippina the Younger the "bad," meddling type. Chapter 3 investigates the role of wife. Livia exemplifies the "good," loyal wife who is not politically active, while Agrippina the Younger illustrates the "bad," sexually manipulative wife who murders her husband to advance her son. Chapter 4 looks at members of the wider imperial family, noting that Suetonius writes more about sexually promiscuous women, such as Drusilla and Julia, than those women, like Domitilla the Younger, who followed social norms by marrying and bearing children. As a result, the Caesares are slanted towards negative portrayals of women. Chapter 5 "reassembles" the fragmented picture of women. The small role that Suetonius writes for Poppaea reveals his independence from Tacitus. The biographer's portrayal of Livia and Agrippina subverts ideals espoused on imperial coins and statues. Overall, the most important role for women in the Caesares is that of mother. By focusing on his portrayal of women, this study also sheds light on Suetonius' use of rhetoric and stereotypes.
Type
Dissertation
Department
Classical Studies
Subject
Literature, Classical
Suetonius
Latin Historiography
Roman Women
Roman History
Roman Empire
Biography
Permalink
https://hdl.handle.net/10161/627
Citation
Pryzwansky, Molly Magnolia (2008). Feminine Imperial Ideals in the Caesares of Suetonius. Dissertation, Duke University. Retrieved from https://hdl.handle.net/10161/627.
Collections
More Info
Show full item record