Peer rejection and social information-processing factors in the development of aggressive behavior problems in children. 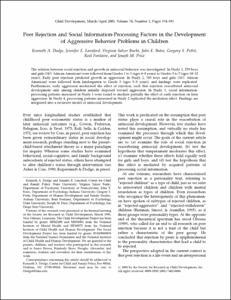 Research Professor in the Sanford School of Public Policy
Jennifer Lansford's research focuses on the development of aggression and other behavior problems in youth, with an emphasis on how family and peer contexts contribute to or protect against these outcomes. She examines how experiences with parents (e.g., physical abuse, discipline, divorce) and peers (e.g., rejection, friendships) affect the development of children's behavior problems, how influence operates in adolescent peer groups, and how cultural contexts moderate links between parenting an
Alphabetical list of authors with Scholars@Duke profiles.