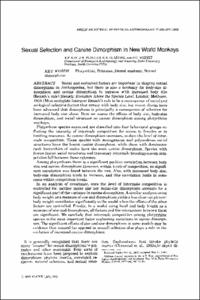 View / Download
1.1 Mb
Date
Authors
Kay, RF
Plavcan, JM
Glander, KE
Wright, PC
Repository Usage Stats
266
views
876
downloads
Abstract
Social and ecological factors are important in shaping sexual dimorphism in Anthropoidea, but there is also a tendency for body-size dimorphism and canine dimorphism to increase with increased body size (Rensch's rule) (Rensch: Evolution Above the Species Level. London: Methuen, 1959.) Most ecologist interpret Rensch's rule to be a consequence of social and ecological selective factors that covary with body size, but recent claims have been advanced that dimorphism is principally a consequence of selection for increased body size alone. Here we assess the effects of body size, body-size dimorphism, and social structure on canine dimorphism among platyrrhine monkeys. Platyrrhine species examined are classified into four behavioral groups reflecting the intensity of intermale competition for access to females or to limiting resources. As canine dimorphism increases, so does the level of intermale competition. Those species with monogamous and polyandrous social structures have the lowest canine dimorphism, while those with dominance rank hierarchies of males have the most canine dimorphism. Species with fission-fusion social structures and transitory intermale breeding-season competition fall between these extremes. Among platyrrhines there is a significant positive correlation between body size and canine dimorphism However, within levels of competition, no significant correlation was found between the two. Also, with increased body size, body-size dimorphism tends to increase, and this correlation holds in some cases within competition levels. In an analysis of covariance, once the level of intermale competition is controlled for, neither molar size nor molar-size dimorphism accounts for a significant part of the variance in canine dimorphism. A similar analysis using body weight as a measure of size and dimorphism yields a less clear-cut picture: body weight contributes significantly to the model when the effects of the other factors are controlled. Finally, in a model using head and body length as a measure of size and dimorphism, all factors and the interactions between them are significant. We conclude that intermale competition among platyrrhine species is the most important factor explaining variations in canine dimorphism. The significant effects of size and size dimorphism in some models may be evidence that natural (as opposed to sexual) selection also plays a role in the evolution of increased canine dimorphism.
Type
Journal article
Subject
Animals
Body Constitution
Body Height
Body Weight
Breeding
Cebidae
Competitive Behavior
Cuspid
Female
Head
Male
Sex Characteristics
Sexual Behavior, Animal
Social Behavior
Permalink
https://hdl.handle.net/10161/6301
Published Version (Please cite this version)
10.1002/ajpa.1330770311
Publication Info
Kay, RF; Plavcan, JM; Glander, KE; & Wright, PC (1988). Sexual selection and canine dimorphism in New World monkeys. Am J Phys Anthropol, 77(3). pp. 385-397. 10.1002/ajpa.1330770311. Retrieved from https://hdl.handle.net/10161/6301.
This is constructed from limited available data and may be imprecise. To cite this article, please review & use the official citation provided by the journal.
Collections
More Info
Show full item record

Professor of Evolutionary Anthropology
I have two areas of research:1) the evolution of primates in South America; and 2) the use of primate anatomy to reconstruct the phylogenetic history and adapations of living and extinct primates, especially Anthropoidea. 1) Evolution of primates and mammalian faunal evolution, especially in South America. For the past 30 years, I have been engaged in research in Argentina, Bolivia The Dominican Republic, Peru, and Colombia with three objectives:a) to reconstruct the evol
Alphabetical list of authors with Scholars@Duke profiles.