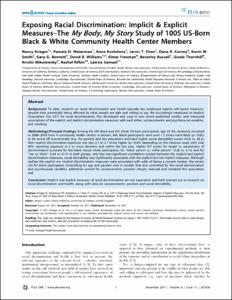 View / Download
568.5 Kb
Date
Author
Bennett, Gary G
Repository Usage Stats
598
views
266
downloads
Abstract
Background -- To date, research on racial discrimination and health typically has employed explicit self-report measures, despite their potentially being affected by what people are able and willing to say. We accordingly employed an Implicit Association Test (IAT) for racial discrimination, first developed and used in two recent published studies, and measured associations of the explicit and implicit discrimination measures with each other, socioeconomic and psychosocial variables, and smoking. Methodology/Principal Findings -- Among the 504 black and 501 white US-born participants, age 35–64, randomly recruited in 2008–2010 from 4 community health centers in Boston, MA, black participants were over 1.5 times more likely (p<0.05) to be worse off economically (e.g., for poverty and low education) and have higher social desirability scores (43.8 vs. 28.2); their explicit discrimination exposure was also 2.5 to 3.7 times higher (p<0.05) depending on the measure used, with over 60% reporting exposure in 3 or more domains and within the last year. Higher IAT scores for target vs. perpetrator of discrimination occurred for the black versus white participants: for “black person vs. white person”: 0.26 vs. 0.13; and for “me vs. them”: 0.24 vs. 0.19. In both groups, only low non-significant correlations existed between the implicit and explicit discrimination measures; social desirability was significantly associated with the explicit but not implicit measures. Although neither the explicit nor implicit discrimination measures were associated with odds of being a current smoker, the excess risk for black participants (controlling for age and gender) rose in models that also controlled for the racial discrimination and psychosocial variables; additional control for socioeconomic position sharply reduced and rendered the association null. Conclusions -- Implicit and explicit measures of racial discrimination are not equivalent and both warrant use in research on racial discrimination and health, along with data on socioeconomic position and social desirability.
Type
Journal article
Permalink
https://hdl.handle.net/10161/6323
Published Version (Please cite this version)
10.1371/journal.pone.0027636
Citation
Krieger, N., P. D. Waterman, et al. (2011). "Exposing Racial Discrimination: Implicit &amp; Explicit Measures–The <italic>My Body, My Story</italic> Study of 1005 US-Born Black &amp; White Community Health Center Members." PLoS ONE 6(11): e27636.
Collections
More Info
Show full item record