Impact of Boat Traffic on Bottlenose Dolphins in Core Creek, NC, with a Case Study of Dolphin-Watch Activities and Consumer 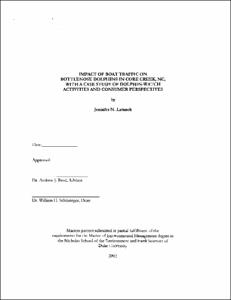 I conducted a land-based theodolite study from June 27 through August 20,2001, to examine the response of dolphins to vessel traffic in Core Creek, NC. Groups of animals were displaced from the Intracoastal Waterway (ICW) when transiting boats passed through the study site. Dolphins changed direction least when multiple boat activities occurred while animals reoriented most when no boats were present. Differences in the directness of groups' travel path were seen among various categories of vessel traffic. Pairs of mothers and calves were closely associated when vessels were present; pairs were farther apart when no boats were in the study site, although this difference was not significant.

I also conducted a social science survey to examine dolphin-watch activities, consumer education, and customer satisfaction on these vessels. I compared customer satisfaction between three boats with varying customer interaction and levels of interactions. Forty-five percent of customers on the operation with highest educational content were satisfied with their trip. Most patrons on the other boats wished to see other activities incorporated into their experiences. Therefore, my study suggests that dolphin-watch patrons to the Beaufort/Morehead City, NC, area value educational content.

From these two studies, I developed policy recommendations to reduce impact of vessel traffic on bottlenose dolphins in Core Creek and to enhance the dolphin-watch .industry in the area. My suggestions include: 1.) Establishment of a regional ecotour operators' association, 2.) Development of a dolphin-watch certification program, 3.) Promotion of land-based operations, and 4.) Integration of naturalists and researchers into daily operations of dolphin-watches.