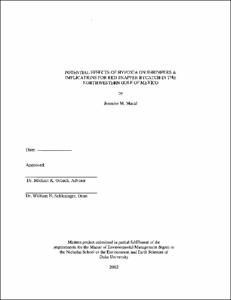 Red snapper (Lutjanus campechanus) is a valuable commercial and recreational fishery on the Gulf of Mexico continental shelf. In recent years red snapper stocks have drastically declined presumably due to a combination of directed overfishing on adults and high mortality of juveniles taken as bycatch in the shrimp trawl fishery. The presence of large-scale hypoxia (1520,000 km2) on the Louisiana shelf that results from nutrient inputs from the Mississippi River system may modify vital rates (growth and mortality) of red snapper via direct effects of low dissolved oxygen or indirect effects mediated by shifts in spatial distribution. This study addresses the hypothesis that hypoxia modifies the distribution of red snapper and their association with shrimpers on the Louisiana continental shelf. Depending on the direction (inshore vs. offshore) and magnitude of shifts in spatial distribution, overlap between snapper and shrimpers and thus, the potential for bycatch interactions, may increase, decrease, or remain the same.

The primary objectives of this study were to examine: (1) annual variation in the spatial distribution of shrimping effort on the Louisiana shelf during the period of most severe hypoxia (July), (2) the spatial distribution of red snapper during the same time period, and (3) annual variation in overlap of shrimping effort and red snapper. I used spatial and statistical ArcViewlInfo Geographic Information System (GIS) mapping and analysis techniques to address the above three objectives. The first dataset that I used for these objectives comes from longterm SEAMAP (Southeast Area Monitoring and Assessment Program) groundfish surveys in the northwestern Gulf of Mexico. Secondly, I used spatial distribution of shrimping effort on a monthly time scale throughout the Gulf to address objective (1) and (3).