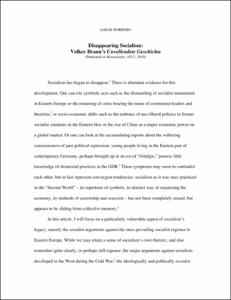 View / Download
150.3 Kb
Date
Author
Norberg, Jakob
Repository Usage Stats
672
views
2,114
downloads
Abstract
One aspect of the Cold War’s legacy has slipped from collective memory: the distinctly socialist arguments against the regimes of the East, for instance the GDR.Volker Braun’s 1977 novella Unvollendete Geschichte provides an instructive example of the current invisibility of such socialist arguments. In the West, Unvollendete Geschichte has been read as a straightforward condemnation of an authoritarian state that penalizes individuals on illegitimate grounds. Yet Braun is a committed socialist and criticizes the state not for its violation of the individual’s integrity, but for the suppression of conflict internal to the collective. A historically sensitive reading reveals that Braun seeks to expose the (East German) state as a distorted manifestation of social collaboration, in line with a radical socialist tradition.
Type
Other article
Subject
Socialism, GDR Literature, Volker Braun
Permalink
https://hdl.handle.net/10161/6389
Citation
Norberg, Jakob (2010). Disappearing Socialism: Volker Braun's Unvollendete Geschichte. Retrieved from https://hdl.handle.net/10161/6389.
Collections
More Info
Show full item record