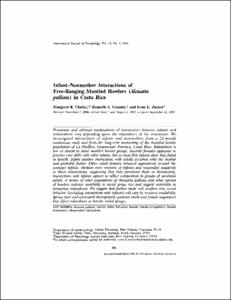 View / Download
1.2 Mb
Date
Authors
Clarke, MR
Glander, KE
Zucker, EL
Repository Usage Stats
175
views
241
downloads
Abstract
Proximate and ultimate explanations of interactions between infants and nonmothers vary depending upon the relatedness of the interactors. We investigated interactions of infants and nonmothers from a 22-month continuous study and from the long-term monitoring of the mantled howler population of La Pacifica, Guanacaste Province, Costa Rica. Relatedness is low or absent in these mantled howler groups. Juvenile females appeared to practice care skills with older infants, but as most first infants died, they failed to benefit. Infant positive interactions with adults occurred with the mother and probable father. Other adult females behaved aggressively toward the youngest infants. Mothers were retentive of infants and responded negatively to these interactions, suggesting that they perceived them as threatening. Interactions with infants appear to reflect competition in groups of unrelated adults. A review of other populations of Alouatta palliata and other species of howlers indicate variability in social group size and suggest variability in intragroup relatedness. We suggest that further study will confirm that social behavior (including interactions with infants) will vary by resource availability (group size) and associated demographic patterns (male and female migration) that affect relatedness in howler social groups.
Type
Journal article
Permalink
https://hdl.handle.net/10161/6416
Collections
More Info
Show full item record