Activation properties of ambient aerosol in the Netherlands 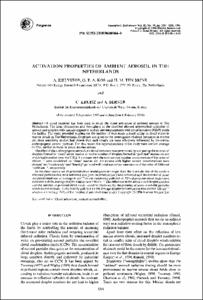 View / Download
955.8 Kb
Date
Authors
Khlystov, A
Kos, GPA
Ten Brink, HM
Kruisz, C
Berner, A
Repository Usage Stats
179
views
274
downloads
Abstract
A cloud chamber has been used to study the cloud activation of ambient aerosol in The Netherlands. The large dimensions and throughput of the chamber allowed unperturbed collection of aerosol and droplets with cascade impactors and on-line measurements with cloud monitors (FSSP) inside the facility. The study provided maxima for the number of man-made aerosol acting as cloud nuclei in marine clouds in The Netherlands. Emphasis was given to the investigation of cloud formation in marine air, since sensitivity studies had shown that such clouds are most effectively influenced by the (extra) anthropogenic aerosol particles. For this reason the supersaturations in the study were low (on average 0.12\%), similar to those in actual marine stratus. The effect of the anthropogenic aerosols on cloud formation was determined by comparing the number of droplets formed in `'clean'' arctic marine air to the number of droplets formed in `'polluted'' marine air (air which had travelled over the U.K.). Air masses with the total aerosol number concentration of the order of 100 cm(-3) were considered as `'clean'' marine air. Air masses with higher aerosol concentrations were divided into `'moderately'' and `'heavily'' polluted with total aerosol concentrations of the order of 1000 and 10,000 cm(-3), respectively. In the clean marine air all potential cloud nuclei (particles lar er than the threshold size of the smallest reference particles that were activated al given supersaturation) were activated and the number of cloud droplets formed was on average 45 cm(-3). In the moderately polluted air 72\% of potential cloud nuclei were activated and the average droplet number was 190 cm(-3). The difference in the actual cloud droplet number and the number of potential cloud nuclei could be explained by the presence of water-insoluble particles which do not activate. In the heavily polluted air the average droplet concentration was around 320 cm(-3) which is, on average, 24\% of the number of potential cloud nuclei. Copyright (C) 1996 Elsevier Science Ltd
Type
Journal article
Permalink
https://hdl.handle.net/10161/6421
Collections
More Info
Show full item record