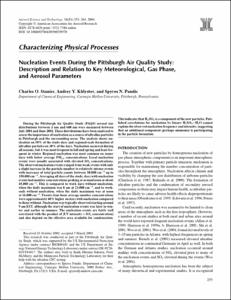 View / Download
668.3 Kb
Date
Authors
Stanier, CO
Khlystov, AY
Pandis, SN
Repository Usage Stats
253
views
309
downloads
Abstract
During the Pittsburgh Air Quality Study (PAQS) aerosol size distributions between 3 nm and 680 nm were measured between July 2001 and June 2002. These distributions have been analyzed to assess the importance of nucleation as a source of ultrafine particles in Pittsburgh and the surrounding areas. The analysis shows nucleation on 50\% of the study days and regional-scale formation of ultrafine particles on 30\% of the days. Nucleation occurred during all seasons, but it was most frequent in fall and spring and least frequent in winter. Regional nucleation was most common on sunny days with below average PM2.5 concentrations. Local nucleation events were usually associated with elevated SO2 concentrations. The observed nucleation events ranged from weak events with only a slight increase in the particle number to relatively intense events with increases of total particle counts between 50,000 cm(-3) up to 150,000 cm(-3). Averaging all days of the study, days with nucleation events had number concentrations peaking at around noon at about 45,000 cm(-3). This is compared to work days without nucleation, when the daily maximum was 8 am at 23,000 cm-3, and to weekends without nucleation, when the daily maximum was at noon at 16,000 cm(-3). Twenty-four-hour average number concentrations were approximately 40\% higher on days with nucleation compared to those without. Nucleation was typically observed starting around 9 am EST, although the start of nucleation events was later in winter and earlier in summer. The nucleation events are fairly well correlated with the product of {[}UV intensity {*} SO2 concentration] and also depend on the effective area available for condensation. This indicates that H2SO4 is a component of the new particles. Published correlations for nucleation by binary H2SO4-H2O cannot explain the observed nucleation frequency and intensity, suggesting that an additional component (perhaps ammonia) is participating in the particle formation.
Type
Journal article
Permalink
https://hdl.handle.net/10161/6430
Collections
More Info
Show full item record