Clean Elections: How has public election funding in Maine and Arizona influenced the behavior of non-candidate political actors? 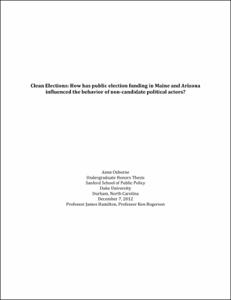 View / Download
426.3 Kb
Date
Author
Osborne, Anne
Repository Usage Stats
300
views
3,690
downloads
Abstract
Maine and Arizona implemented public funding systems for state elections in 2000 with the aim of increasing competition and voter choice, curbing election costs, and reducing the influence of special interest money in elections. How have these “Clean Elections” systems influenced or changed the behavior of political actors such as lobbyists, interest groups, party leaders, and legislative staff? Interviews were conducted in both Maine and Arizona to determine whether the amount of money that lobbyists and interest groups spent on elections decreased due to Clean Elections, whether their access to legislators had changed, and whether party leaders were able to focus more on voter contact as opposed to fundraising. Clean Elections did not have an impact on access to legislators, because legislators were open and accessible before the law passed. Similarly, the amount of money spent on elections did not decrease, because lobbyists and special interests found other ways to donate—they now donate to leadership political action committees and state parties, or they make independent expenditures. However, while Clean Elections have not succeeded in limiting the influence of special interest money, they have made the process more democratic and inclusive.
Type
Honors thesis
Department
Public Policy Studies
Subject
politics
elections
campaign finance
public funding
state level
special interests
Permalink
https://hdl.handle.net/10161/6451
Citation
Osborne, Anne (2012). Clean Elections: How has public election funding in Maine and Arizona influenced the behavior of non-candidate political actors?. Honors thesis, Duke University. Retrieved from https://hdl.handle.net/10161/6451.
Collections
More Info
Show full item record