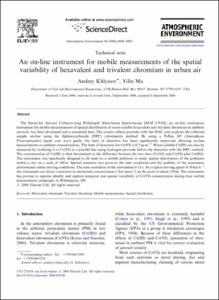 View / Download
338.4 Kb
Date
Authors
Khlystov, Andrey
Ma, Yilin
Repository Usage Stats
184
views
671
downloads
Abstract
The Steam-Jet Aerosol Collector-long Pathlength Absorbance Spectroscopy (SJAC-LPAS), an on-line continuous instrument for mobile measurements of spatial distribution of water-soluble hexavalent and trivalent chromium in ambient aerosols, has been developed and is presented here. The system collects particles with the SJAC and analyzes the collected sample on-line using the diphenycarbazide (DPC) colorimetric method. By using a Teflon AF (Amorphous Fluoropolymer) liquid core wave guide, the limit of detection has been significantly improved, allowing on-line measurements at ambient concentrations. The limit of detection for Cr(VI) is 0.2 ng m(-3). Water-soluble Cr(III) can also be measured by oxidizing it to Cr(VI) in a parallel line using hydrogen peroxide before the detection with the DPC method. The concentration of Cr(III) is then determined as the difference between the two lines (Cr(VI) and Cr(VI) plus Cr(III)). The instrument was specifically designed to be used on a mobile platform to study spatial distribution of the pollutant within a city on a scale of 100 m. Special attention was given to the time resolution and the stability of the instrument performance under driving conditions. The time resolution of the instrument is 15 s. At a typical driving speed of 30 km h(-1) the instrument can detect variations in chromium concentration ({''}hot spots{''}) on the scale of about 150 m. The instrument has proven to operate reliably and capture temporal and spatial variability of Cr(VI) concentration during four mobile measurement campaigns in Wilmington, DE. (c) 2006 Elsevier Ltd. All rights reserved.
Type
Journal article
Permalink
https://hdl.handle.net/10161/6452
Collections
More Info
Show full item record