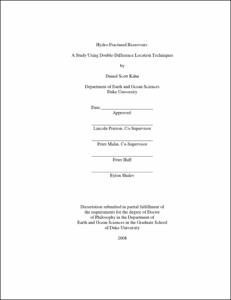 The mapping of induced seismicity in enhanced geothermal systems presents the best tool available for understanding the resulting hydro-fractured reservoir. In this thesis, two geothermal systems are studied; one in Krafla, Iceland and the other in Basel Switzerland. The purpose of the Krafla survey was to determine the relation between water injection into the fault system and the resulting earthquakes and fluid pressure in the subsurface crack system. The epicenters obtained from analyzing the seismic data gave a set of locations that are aligned along the border of a high resistivity zone ~2500 meters below the injection well. Further magneto-telluric/seismic-data correlation was seen in the polarity of the cracks through shear wave splitting. The purpose of the Basel project was to examine the creation of a reservoir by the initial stimulation, using an injection well bored to 5000 meters. This stimulation triggered a M3.4 event, extending the normal range of event sizes commonly incurred in hydro-fractured reservoirs. To monitor the seismic activity 6 seismometer sondes were deployed at depths from 317 to 2740 meters below the ground surface. During the seven-day period over 13,000 events were recorded and approximately 3,300 located. These events were first located by single-difference techniques. Subsequently, after calculating their cross-correlation coefficients, clusters of events were relocated using a double-difference algorithm. The event locations support the existence of a narrow reservoir spreading form the injection well. Analysis of the seismic data indicates that the reservoir grew at a uniform rate punctuated by fluctuations which occurred at times of larger events, which were perhaps caused by sudden changes in pressure. The orientation and size of the main fracture plane was found by determining focal mechanisms and locating events that were similar to the M3.4 event. To address the question of whether smaller quakes are simply larger quakes scaled down, the data set was analyzed to determine whether scaling relations held for the source parameters, including seismic moment, source dimension, stress drop, radiated energy and apparent stress. It was found that there was a breakdown in scaling for smaller quakes.