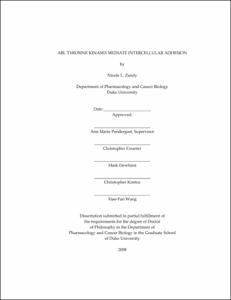 Adherens junctions are calcium-dependent cell-cell contacts formed during epithelial morphogenesis that link neighboring cells via cadherin receptors. Coordinated regulation of the actin cytoskeleton by the Rho GTPases is required for the formation and dissolution of adherens junctions, however the pathways that link cadherin signaling to cytoskeletal regulation remain poorly defined. The Abl family of tyrosine kinases have been shown to modulate cytoskeletal reorganization downstream of various extracellular signals including growth factor receptors and integrins.

Here we use pharmacological inhibition and RNA interference to identify the Abl family kinases as critical mediators of cadherin-mediated adhesion. Endogenous Abl family kinases, Abl and Arg, are activated and are required for Rac activation following cadherin engagement, and regulate the formation and maintenance of adherens junctions in mammalian cells. Significantly, we show that Abl-dependent regulation of the Rho-ROCK-myosin signaling pathway is critical for the maintenance of adherens junctions. Inhibition of the Abl kinases in epithelial sheets results in activation of Rho and its downstream target ROCK, leading to enhanced phosphorylation of the myosin regulatory light chain. These signaling events result in enhanced stress fiber formation and increased acto-myosin contractility, thereby disrupting adherens junctions. Conversely, Arg gain-of-function promotes adherens junction formation through a Crk-dependent pathway in cells with weak junctions. These data identify the Abl kinases as a novel regulatory link between the cadherin/catenin adhesion complex and the actin cytoskeleton through regulation of Rac and Rho during adherens junction formation.

Finally, we identified the Abl kinases as critical mediators of epithelial cell response to HGF. Pharmacological inhibition of Abl kinase activity resulted in impaired dissolution of adherens junctions downstream of HGF stimulation of the Met receptor. Additionally, we observed decreased phosphorylation of the Met receptor itself, along with Gab1 and Crk, downstream effectors of Met signaling. Taken together, these data suggest a requirement for Abl kinases in both adherens junctions formation and turnover.