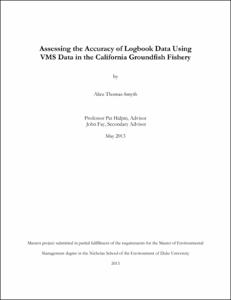 View / Download
1.1 Mb
Date
Author
Thomas-Smyth, Alice
Advisor
Halpin, Patrick N.
Repository Usage Stats
186
views
567
downloads
Abstract
I will work with the logbook and VMS data from the 2009 California groundfish fishery to analyze if fishers are correctly reporting their trawl locations. Once the two datasets are matched by vessel ID and trip numbers, simple distance analysis will average the distance between logbook trawl data and their corresponding VMS points. While error is expected, it is likely that the distances measured will be too small to make significant difference in analysis when using the fishing blocks described above. The two most likely sources of error are the transcription of geographic coordinates by fishers in the logbook (due to significant rounding of decimal degrees) and the nature of how the logbook data is recorded. Because the data is two coordinates connected by a straight line segment there will be disparity between the true trawling path (which likely follows bathymetry contours) and the straight depiction of the activity.
Type
Master's project
Department
Nicholas School of the Environment and Earth Sciences
Permalink
https://hdl.handle.net/10161/6494
Citation
Thomas-Smyth, Alice (2013). Assessing the Accuracy of Logbook Data Using VMS Data in the California Groundfish Fishery. Master's project, Duke University. Retrieved from https://hdl.handle.net/10161/6494.
Collections
More Info
Show full item record