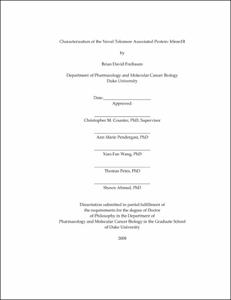 Telomeres are the ends of chromosomes which are composed of repetitive DNA sequence and telomere associated proteins. In C. elegans, the protein F39H2.5 was found to associate with the telomere, regulating both telomere length and genomic integrity. F39H2.5 is a member of the β-CASP family of proteins that are known to possess nuclease activity on DNA substrates. I thus sought to address whether any of the human β-CASP family proteins associated with telomeres. Here I show that hSnm1B localized to the telomere indirectly, via interaction with the double-stranded telomere binding protein TRF2. The terminal 37 amino acids of hSnm1B are necessary and sufficient for binding TRF2, and moreover that binding to TRF2 stabilized hSnm1B protein by preventing ubiquitination. In the absence of exogenous TRF2 this domain acted as a degron, promoting protein instability. I thus termed the domain the Protection And INstability (PAIN) domain. I hypothesize that TRF2 binding ensures that hSnm1B will only accumulate at telomeres by preventing the degradation of hSnm1B. However, hSnm1B stability appears to be further regulated, as telomere specific DNA damage stabilized hSnm1B independent of the PAIN domain. Thus, it appears that the telomere associated protein, hSnm1B, is regulated by protein stability in a manner that is both dependent and independent of the PAIN domain.