Look on the Bright Side: Self-Expressive Consumption and Consumer Self-Worth 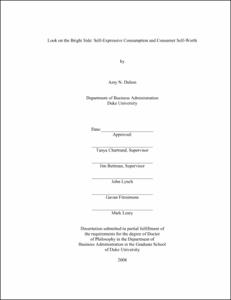 This research investigates the interplay between self-worth and consumption, and explores the substantive phenomenon of trading up. Laboratory experiments were conducted in which participants were led to fail (or not) on an intelligence test, which threatened their feelings of self-worth (or not). Following the failure, participants made consumer choices. Of key interest was whether threatened self-worth would result in more "trading up" - that is, selecting more expensive products or retail stores. Results revealed that compared to consumers whose self-worth was not threatened, threatened consumers demonstrated more self-expressive consumption: trading up when a product portrayed "me" (high on self-relevance), or not trading up when a product portrayed "not me" (low on self-relevance). Self-relevance was operationalized in terms of choice sets (i.e., the choice between two Duke t-shirts vs. two white t-shirts) and individual differences in the tendency to consider material objects part of the self (this was measured via a questionnaire).