Are the native giant tortoises from the Seychelles really extinct? A genetic perspective based on mtDNA and microsatellite data. 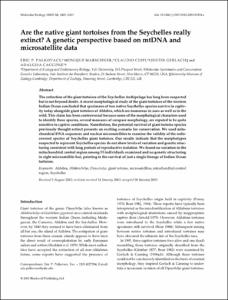 View / Download
268.1 Kb
Date
Authors
Palkovacs, EP
Marschner, M
Ciofi, C
Gerlach, J
Caccone, A
Repository Usage Stats
192
views
365
downloads
Abstract
The extinction of the giant tortoises of the Seychelles Archipelago has long been suspected but is not beyond doubt. A recent morphological study of the giant tortoises of the western Indian Ocean concluded that specimens of two native Seychelles species survive in captivity today alongside giant tortoises of Aldabra, which are numerous in zoos as well as in the wild. This claim has been controversial because some of the morphological characters used to identify these species, several measures of carapace morphology, are reputed to be quite sensitive to captive conditions. Nonetheless, the potential survival of giant tortoise species previously thought extinct presents an exciting scenario for conservation. We used mitochondrial DNA sequences and nuclear microsatellites to examine the validity of the rediscovered species of Seychelles giant tortoises. Our results indicate that the morphotypes suspected to represent Seychelles species do not show levels of variation and genetic structuring consistent with long periods of reproductive isolation. We found no variation in the mitochondrial control region among 55 individuals examined and no genetic structuring in eight microsatellite loci, pointing to the survival of just a single lineage of Indian Ocean tortoises.
Type
Journal article
Subject
Animals
DNA Primers
DNA, Mitochondrial
Genetic Variation
Geography
Microsatellite Repeats
Population Dynamics
Seychelles
Species Specificity
Turtles
Permalink
https://hdl.handle.net/10161/6530
Collections
More Info
Show full item record