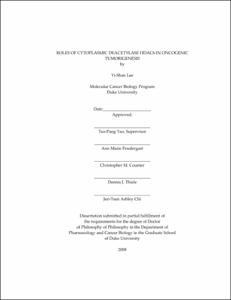 Reversible acetylation has emerged as an important post-translational modification that rivals phosphorylation in regulating chromatin structure and gene expression. Acetylation of histone is associated with transcriptional activation while deacetylation is linked to transcriptional repression. Moreover, histone deacetylase inhibitors induce growth arrest, differentiation and apoptosis of cancer cells and therefore appear to be promising anti-tumor agents. While transcriptional deregulation is thought to be the main mechanism underlying their therapeutic effects, the exact mechanisms and targets by which HDAC inhibitors, which are mostly non-specific, achieve their anti-tumor effects remain poorly understood. In other words, it is not known which and how each HDAC members are involved in supporting tumor growth.

In this thesis, I have showed that HDAC6, a cytoplasmic localized and cytoskeleton-associated deacetylase, is required for efficient oncogenic transformation and tumor formation. I have found that HDAC6 expression is induced upon oncogenic Ras-induced transformation in both human somatic cells and murine fibroblasts. Conversely, murine fibroblasts deficient in HDAC6 are more resistant to both oncogenic Ras and ErbB2-dependent transformation, indicating a critical role for HDAC6 in oncogene-induced transformation. Supporting this hypothesis, inactivation of HDAC6 in several human cancer cell lines effectively impairs anchorage-independent growth in vitro and their ability to form tumors in immunocompromised mice. I have demonstrated that the impairment of anchorage independent growth in HDAC6 deficient cells is associated with increased anoikis and mechanistically a defect in activation of the AKT and ERK kinase cascades. Additionally, HDAC6 null mice are more resistant to two-stage chemical carcinogen-induced skin tumors. Finally, I have demonstrated that the tumor-promoting effect of HDAC6 is probably mediated through the molecular chaperon Hsp90. While Hsp90 is known to be deacetylated by HDAC6 and has been implicated in stabilizing Raf-1 and ErbB2, I have found that suppression of HDAC6 impairs the stability of Raf-1 and the association between Hsp90 and ErbB2.

In conclusion, my work provides the first experimental evidence that of all the HDAC members, the cytoplasmic deacetylase HDAC6 is required for efficient oncogenic transformation, indicating that reversible acetylation plays a critical role in regulating cellular functions of non-histone non-nuclear cytoplasmic proteins that contributes to malignant transformation. Furthermore, this work identifies HDAC6 as an important component underlying the anti-tumor effects of HDAC inhibitors.