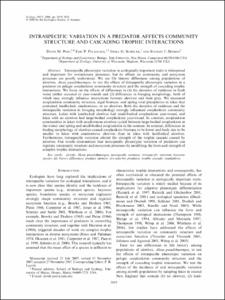 View / Download
1.1 Mb
Date
Authors
Post, DM
Palkovacs, EP
Schielke, EG
Dodson, SI
Repository Usage Stats
250
views
730
downloads
Abstract
Intraspecific phenotypic variation in ecologically important traits is widespread and important for evolutionary processes, but its effects on community and ecosystem processes are poorly understood. We use life history differences among populations of alewives, Alosa pseudoharengus, to test the effects of intraspecific phenotypic variation in a predator on pelagic zooplankton community structure and the strength of cascading trophic interactions. We focus on the effects of differences in (1) the duration of residence in fresh water (either seasonal or year-round) and (2) differences in foraging morphology, both of which may strongly influence interactions between alewives and their prey. We measured zooplankton community structure, algal biomass, and spring total phosphorus in lakes that contained landlocked, anadromous, or no alewives. Both the duration of residence and the intraspecific variation in foraging morphology strongly influenced zooplankton community structure. Lakes with landlocked alewives had small-bodied zooplankton year-round, and lakes with no alewives had large-bodied zooplankton year-round. In contrast, zooplankton communities in lakes with anadromous alewives cycled between large-bodied zooplankton in the winter and spring and small-bodied zooplankton in the summer. In summer, differences in feeding morphology of alewives caused zooplankton biomass to be lower and body size to be smaller in lakes with anadromous alewives than in lakes with landlocked alewives. Furthermore, intraspecific variation altered the strength of the trophic cascade caused by alewives. Our results demonstrate that intraspecific phenotypic variation of predators can regulate community structure and ecosystem processes by modifying the form and strength of complex trophic interactions.
Type
Journal article
Subject
Animals
Connecticut
Fishes
Food Chain
Fresh Water
Predatory Behavior
Seawater
Zooplankton
Permalink
https://hdl.handle.net/10161/6541
Collections
More Info
Show full item record