Mass balance closure and the federal reference method for PM2.5 in Pittsburgh, Pennsylvania 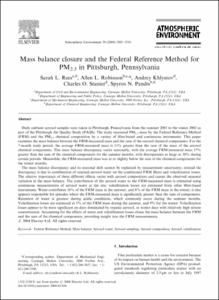 View / Download
657.3 Kb
Date
Authors
Rees, Sarah L
Robinson, Allen L
Khlystov, Andrey
Stanier, Charles O
Pandis, Spyros N
Repository Usage Stats
230
views
574
downloads
Abstract
Daily ambient aerosol samples were taken in Pittsburgh, Pennsylvania from the summer 2001 to the winter 2002 as part of the Pittsburgh Air Quality Study (PAQS). The study measured PM2.5 mass by the Federal Reference Method (FRM) and the PM2.5 chemical composition by a variety of filter-based and continuous instruments. This paper examines the mass balance between the FRM-measured mass and the sum of the aerosol chemical components. For the 7-month study period, the average FRM-measured mass is 11\% greater than the sum of the mass of the aerosol chemical components. This mass balance discrepancy varies seasonally, with the average FRM-measured mass 17\% greater than the sum of the chemical components for the summer months, with discrepancies as large as 30\% during certain periods. Meanwhile, the FRM-measured mass was at or slightly below the sum of the chemical components for the winter months. The mass balance discrepancy and its seasonal shift cannot be explained by measurement uncertainty; instead the discrepancy is due to combination of retained aerosol water on the conditioned FRM filters and volatilization losses. The relative importance of these different effects varies with aerosol composition and causes the observed seasonal variation in the mass balance. The contribution of the aerosol water to the FRM-measured mass is estimated using continuous measurements of aerosol water at the site; volatilization losses are estimated from other filter-based instruments. Water contributes 16\% of the FRM mass in the summer, and 8\% of the FRM mass in the winter; it also appears responsible for episodes where the FRM-measured mass is significantly greater than the sum of components. Retention of water is greatest during acidic conditions, which commonly occur during the summer months. Volatilization losses are estimated at 5\% of the FRM mass during the summer, and 9\% for the winter. Volatilization losses appear to be most significant on days dominated by organic aerosol, or winter days with relatively high nitrate concentration. Accounting for the effects of water and volatilization losses closes the mass balance between the FRM and the sum of the chemical components, providing insight into the FRM measurements. (C) 2004 Elsevier Ltd. All rights reserved.
Type
Journal article
Permalink
https://hdl.handle.net/10161/6547
Collections
More Info
Show full item record