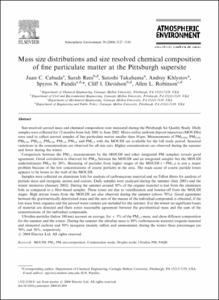 View / Download
595.1 Kb
Date
Authors
Cabada, Juan C
Rees, Sarah
Takahama, Satoshi
Khlystov, Andrey
Pandis, Spyros N
Davidson, Cliff I
Robinson, Allen L
Repository Usage Stats
489
views
795
downloads
Abstract
Size-resolved aerosol mass and chemical composition were measured during the Pittsburgh Air Quality Study. Daily samples were collected for 12 months from July 2001 to June 2002. Micro-orifice uniform deposit impactors (MOUDIs) were used to collect aerosol samples of fine particulate matter smaller than 10 mum. Measurements of PM0.056, PM0.10, PM0.18, PM0.32, PM0.56, PM1.0, PM1.8 and PM2.5 with the MOUDI are available for the full study period. Seasonal variations in the concentrations are observed for all size cuts. Higher concentrations are observed during the summer and lower during the winter. Comparison between the PM2.5 measurements by the MOUDI and other integrated PM samplers reveals good agreement. Good correlation is observed for PM10 between the MOUDI and an integrated sampler but the MOUDI underestimates PM10 by 20\%. Bouncing of particles from higher stages of the MOUDI ( > PM2.5) is not a major problem because of the low concentrations of coarse particles in the area. The main cause of coarse particle losses appears to be losses to the wall of the MOUDI. Samples were collected on aluminum foils for analysis of carbonaccous material and on Teflon filters for analysis of particle mass and inorganic anions and cations. Daily samples were analyzed during the summer (July 2001) and the winter intensives (January 2002). During the summer around 50\% of the organic material is lost from the aluminum foils as compared to a filter-based sampler. These losses are due to volatilization and bounce-off from the MOUDI stages. High nitrate losses from the MOUDI are also observed during the summer (above 70\%). Good agreement between the gravimetrically determined mass and the sum of the masses of the individual compounds is obtained, if the lost mass from organics and the aerosol water content are included for the summer. For the winter no significant losses of material are detected and there exists reasonable agreement between the gravimetrical mass and the sum of the concentrations of the individual compounds. Ultrafine particles (below 100 nm) account on average, for
Type
Journal article
Permalink
https://hdl.handle.net/10161/6548
Collections
More Info
Show full item record