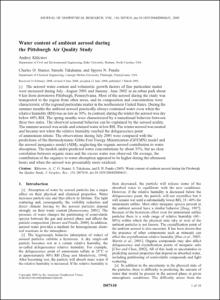 View / Download
699.6 Kb
Date
Authors
Khlystov, A
Stanier, CO
Takahama, S
Pandis, SN
Repository Usage Stats
226
views
660
downloads
Abstract
The aerosol water content and volumetric growth factors of fine particulate matter were measured during July-August 2001 and January-June 2002 in an urban park about 6 km from downtown Pittsburgh, Pennsylvania. Most of the aerosol during the study was transported to the region from other areas, and its composition and concentration were characteristic of the regional particulate matter in the northeastern United States. During the summer months the ambient aerosol practically always contained water even when the relative humidity ( RH) was as low as 30\%. In contrast, during the winter the aerosol was dry below 60\% RH. The spring months were characterized by a transitional behavior between these two states. The observed seasonal behavior can be explained by the aerosol acidity. The summer aerosol was acidic and retained water at low RH. The winter aerosol was neutral and became wet when the relative humidity reached the deliquescence point of ammonium nitrate. The observations during July 2001 were compared with the predictions of the thermodynamic Gibbs Free Energy Minimization (GFEMN) model and the aerosol inorganics model ( AIM), neglecting the organic aerosol contribution to water absorption. The models under-predicted water concentrations by about 35\%, but no clear correlation between organic mass and the excess water was observed. On average, the contribution of the organics to water absorption appeared to be higher during the afternoon hours and when the aerosol was presumably more oxidized.
Type
Journal article
Permalink
https://hdl.handle.net/10161/6552
Collections
More Info
Show full item record