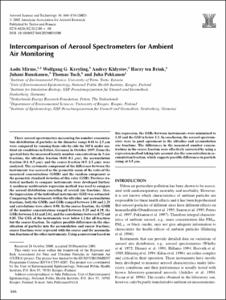 View / Download
309.4 Kb
Date
Authors
Mirme, Aadu
Kreyling, Wolfgang G
Khlystov, Andrey
Brink, Harry ten
Ruuskanen, Juhani
Tuch, Thomas
Pekkanen, Juha
Repository Usage Stats
141
views
276
downloads
Abstract
Three aerosol spectrometers measuring the number concentration distribution of particles in the diameter range 0.01 to 2.5 mum were compared by running them side-by-side for 385 h under ambient air conditions in Erfurt, Germany in October 1997. From the spectral data the measured hourly number concentrations in 3 size fractions, the ultrafine fraction (0.01-0.1 mum), the accumulation fraction (0.1-0.5 mum), and the coarse fraction (0.5-2.5 mum), were analyzed. The systematic component of the difference between the instruments was assessed as the geometric mean of the ratio of the measured concentrations (GMR) and the random component as the geometric standard deviation of this ratio (GSR). Previous statistical methods to compare instruments were developed further. A nonlinear multivariate regression method was used to compare the aerosol distribution consisting of several size fractions. Also, the imprecision of the individual instruments (GSI) was estimated. Comparing the instruments within the ultrafine and accumulation fractions, both the GMRs and GSRs ranged between 1.06 and 1.23 and correlations were above 0.98. In the coarse fraction, the GMR of the number concentrations ranged between 0.25 and 4.19, the GSRs between 1.81 and 2.61, and the correlations between 0.72 and 0.85. The GSIs of the instruments were below 1.2 for all fractions but the coarse fraction. To explore possible differences in the classification of particles into the accumulation and coarse fractions, coarse fractions were regressed with the coarse and the accumulation fractions of the other instruments. Using a conversion based on this regression, the GSRs between instruments were minimized to 1.35 and the GSI to below 1.3. In conclusion, the aerosol spectrometers were in good agreement in the ultrafine and accumulation size fractions. The differences in the measured number concentrations in the coarse fraction were effectively corrected by using a regression method taking into account also the concentration in accumulation fraction, which suggests possible differences in particle sizing at 0.5 mum.
Type
Journal article
Permalink
https://hdl.handle.net/10161/6556
Collections
More Info
Show full item record