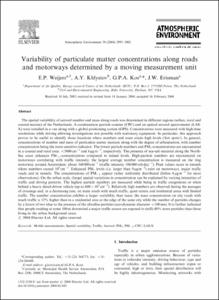 View / Download
594.3 Kb
Date
Authors
Weijers, EP
Khlystov, AY
Kos, GPA
Erisman, JW
Repository Usage Stats
231
views
593
downloads
Abstract
The spatial variability of aerosol number and mass along roads was determined in different regions (urban, rural and coastal-marine) of the Netherlands. A condensation particle counter (CPC) and an optical aerosol spectrometer (LAS-X) were installed in a van along with a global positioning system (GPS). Concentrations were measured with high-time resolutions while driving allowing investigations not possible with stationary equipment. In particular, this approach proves to be useful to identify those locations where numbers and mass attain high levels ('hot spots'). In general, concentrations of number and mass of particulate matter increase along with the degree of urbanisation, with number concentration being the more sensitive indicator. The lowest particle numbers and PM1-concentrations are encountered in a coastal and rural area: <5000cm-3 and 6μgm-3, respectively. The presence of sea-salt material along the North-Sea coast enhances PM>1-concentrations compared to inland levels. High-particle numbers are encountered on motorways correlating with traffic intensity; the largest average number concentration is measured on the ring motorway around Amsterdam: about 160000cm-3 (traffic intensity 100000vehday-1). Peak values occur in tunnels where numbers exceed 106cm-3. Enhanced PM1 levels (i.e. larger than 9μgm-3) exist on motorways, major traffic roads and in tunnels. The concentrations of PM>1 appear rather uniformly distributed (below 6μgm-3 for most observations). On the urban scale, (large) spatial variations in concentration can be explained by varying intensities of traffic and driving patterns. The highest particle numbers are measured while being in traffic congestions or when behind a heavy diesel-driven vehicle (up to 600×103cm-3). Relatively high numbers are observed during the passages of crossings and, at a decreasing rate, on main roads with much traffic, quiet streets and residential areas with limited traffic. The number concentration exhibits a larger variability than mass: the mass concentration on city roads with much traffic is 12% higher than in a residential area at the edge of the same city while the number of particles changes by a factor of two (due to the presence of the ultrafine particles (aerodynamic diameter <100nm). It is further indicated that people residing at some 100m downwind a major traffic source are exposed to (still) 40% more particles than those living in the urban background areas. © 2004 Elsevier Ltd. All rights reserved.
Type
Journal article
Permalink
https://hdl.handle.net/10161/6557
Published Version (Please cite this version)
10.1016/j.atmosenv.2004.02.045
Publication Info
Weijers, EP; Khlystov, AY; Kos, GPA; & Erisman, JW (2004). Variability of particulate matter concentrations along roads and motorways determined by a moving measurement unit. Atmospheric Environment, 38(19). pp. 2993-3002. 10.1016/j.atmosenv.2004.02.045. Retrieved from https://hdl.handle.net/10161/6557.
This is constructed from limited available data and may be imprecise. To cite this article, please review & use the official citation provided by the journal.
Collections
More Info
Show full item record