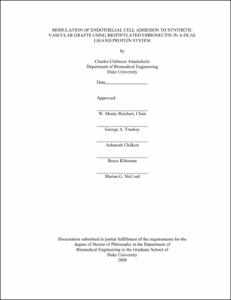 Over half a million coronary artery bypass operations are performed annually in the US yielding an annual health care cost of over 16 billion dollars. Only five percent of bypasses are repeat operations in spite of the procedures prevalence. Patients facing repeat coronary artery bypass operations often lack transplantable autologous arteries or veins, necessitating the use of substitutes. Unfortunately, synthetic small diameter vascular grafts have unacceptable patency rates, primarily due to lumenal thrombus formation and intimal thickening. Endothelial cells (EC) mediate the anti-thrombotic activity in healthy blood vessels, and due to the scarcity of suitable autologous vascular replacement, EC-seeded small diameter synthetic vascular grafts represent a clear, immediate, and practical solution. The fundamental goal of this project was to optimize the dual ligand (DL) system on synthetic vascular graft (SVG) surrogates to show enhanced cell adhesion, retention, and native functionality compared to fibronectin alone. Initially, two SVG surrogates were identified through characterization by x-ray photoelectron spectroscopy (XPS), atomic force microscopy (AFM), and 125I radiolabeling. The first modification to the DL system involved direct biotinylation of fibronectin (bFN) as a replacement for co-adsorption of FN with biotinylated bovine serum albumin (bBSA). This was analyzed with a Langmuir model using surface plasmon resonance (SPR) spectroscopy to verify the binding affinity of bFN and ELISA to detect the availability of the RGD binding motif post biotinylation. The second major change in this project examined cell binding and formation of focal adhesion after shifting from direct incubation of HUVECs with RGD-SA to sequentially adsorbing bFN(9) and RGD-SA prior to introducing unmodified HUVECs. These experiments were conducted under static seeding conditions. Next, dynamic cell seeding onto the sequentially adsorbed protein surface was examined as a function of surface immobilized protein and Trypsin/EDTA concentration. SPR results showed statistical differences in α5β1 and αvβ3 integrin binding to RGD cell binding motifs introduced by bFN(9) and RGD-SA. Increase in binding specificity through these integrins lead to rapid cell binding and retention on Teflon-AF surfaces adsorbed with this protein formulation. This system appears to be the nexus at which the DL has proven its value. These results could have broader implications in augmenting EC attachment to SVG prior to implantation.