Industrial workers and the birth of the Populist Republic in Brazil, 1945-1946 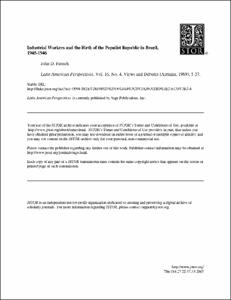 View / Download
1.9 Mb
Date
Author
French, JD
Repository Usage Stats
166
views
186
downloads
Abstract
Examines the central role which Brazilian industrial workers played in the political transition of 1945-1946 that ended the Estado Novo dictatorship and opened the era of electoral democracy known as the Brazilian Populist Republic (1946-1964). Argues that the events of 1945-1946 are best seen as a radical break with the past, marked by the entry of the urban working class into Brazilian political life: Vargas's 1945 electoral legislation was consciously and successfully designed to alter the Brazilian electoral process through effective mass enfranchisement of the urban areas. In order to understand postwar popular and leftist trends, one must discern the contours of mass working-class consciousness, its characteristics, psychology, and direction of development. -from Editor
Type
Journal article
Permalink
https://hdl.handle.net/10161/6571
Collections
More Info
Show full item record Professor of History
I am a professor of History at Duke University with secondary appointments in African and African-American as well as International Comparative Studies in Durham North Carolina. With a B.A. from Amherst College, I received my doctorate at Yale in 1985 under Brazilian historian Em&iacute;lia Viotti da Costa. Since 1979, I have been studying class, race, and politics in Brazil from UNC Press zil, Latin America, and beyond with 48 refereed articles and four books. My newest monograph is forthc