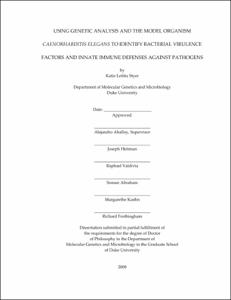 An estimated twenty-five percent of the fifty-seven million annual deaths worldwide can be directly attributed to infectious disease. Mammals contain both adaptive and innate immune systems to deal with invading pathogens. The genetic model organism Caenorhabditis elegans lacks an adaptive immune system, which makes it a powerful model organism to study the innate immune system without the added complexity of an adaptive immune system. Multiple human pathogens can cause lethal infections in C. elegans and several C. elegans innate immune pathways have been identified that are conserved with mammals and protect the nematode from infection. The goal of this work was to identify novel bacterial virulence factors and innate immune defenses against pathogens by using the genetic model organism C. elegans. We established C. elegans as a model for Yersinia pestis infection and used this model to identify novel bacterial virulence factors that were also important for virulence in a mammalian model of infection. Previous studies demonstrated that C. elegans can identify bacterial pathogens using sensory neurons and activate an avoidance response that requires components of G-protein signaling pathways. We screened forty C. elegans strains containing mutations in chemosensory G-protein coupled receptors for altered survival on pathogen and identified npr-1 to be required for full C. elegans defense against pathogens. We found that activation of the NPR-1 nervous circuit enhances host susceptibility to microbial infection while inhibition of the circuit boosts innate immunity. This data provides the first evidence that innate immunity in C. elegans is directly linked to the nervous system and establishes the nematode as a novel system to study neuroimmunology. From this work, we have identified Y. pestis virulence-related genes and C. elegans innate immune effector genes required for innate immunity to human bacterial pathogens.