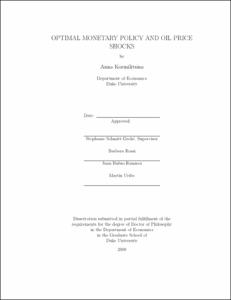 This dissertation is comprised of two chapters. In the first chapter, I investigate the role of systematic U.S. monetary policy in the presence of oil price shocks. The second chapter is devoted to studying different approaches to modeling energy demand.

In an influential paper, Bernanke, Gertler, and Watson (1997) and (2004) argue that systematic monetary policy exacerbated the recessions the U.S. economy experienced in the aftermath of post World War II oil price shocks. In the first chapter of this dissertation, I critically evaluate this claim in the context of an estimated medium-scale model of the U.S. business cycle. Specifically, I solve for the Ramsey optimal monetary policy in the medium-scale dynamic stochastic general equilibrium model (henceforth DSGE) of Schmitt-Grohe and Uribe (2005). To model the demand for oil, I use the approach of Finn (2000). According to this approach, the utilization of capital services requires oil usage. In the related literature on the macroeconomic effects of oil price shocks, it is common to calibrate structural parameters of the model. In contrast to this literature, I estimate the parameters of my DSGE model. The estimation strategy involves matching the impulse responses from the theoretical model to responses predicted by an empirical model. For estimation, I use the alternative to the classical Laplace type estimator proposed by Chernozhukov and Hong (2003). To obtain the empirical impulse responses, I identify an oil price shock in a structural VAR (SVAR) model of the U.S. business cycle. The SVAR model predicts that, in response to an oil price increase, GDP, investment, hours, capital utilization, and the real wage fall, while the nominal interest rate and inflation rise. These findings are economically intuitive and in line with the existing empirical evidence. Comparing the actual and the Ramsey optimal monetary policy response to an oil price shock, I find that the optimal policy allows for more inflation, a larger drop in wages, and a rise in hours compared to those actually observed. The central finding of this Chapter is that the optimal policy is associated with a smaller drop in GDP and other macroeconomic variables. The latter results therefore confirm the claim of Bernanke, Gertler and Watson that monetary policy was to a large extent responsible for the recessions that followed the oil price shocks. However, under the optimal policy, interest rates are tightened even more than what is predicted by the empirical model. This result contrasts sharply with the claim of Bernanke, Gertler, and Watson that the Federal Reserve exacerbated recessions by the excessive tightening of interest rates in response to the oil price increases. In contrast to related studies that focus on output stabilization, I find that eliminating the negative response of GDP to an oil price shock is not desirable.

In the second chapter of this dissertation, I compare two approaches to modeling energy sector. Because the share of energy in GDP is small, models of energy have been criticized for their inability to explain sizeable effects of energy price increases on the economic activity. I find that if the price of energy is an exogenous AR(1) process, then the two modeling approaches produce the responses of GDP similar in size to responses observed in most empirical studies, but fail to produce the timing and the shape of the response. DSGE framework can solve the timing and the shape of impulse responses problem, however, fails to replicate the size of the impulse responses. Thus, in DSGE frameworks, amplifying mechanisms for the effect of the energy price shock and estimation based calibration of model parameters are needed to produce the size of the GDP response to the energy price shock.