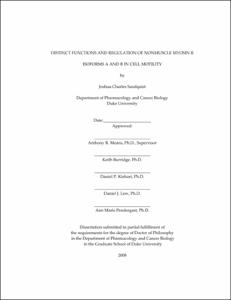 The ability of cells to migrate is of fundamental importance to a diverse array of biological processes, both physiological and pathological, such as development, the immune response and cancer cell metastasis, to name a few. The process of cell movement is a complicated cycle of coordinated steps involving dynamic and precise rearrangement of the actin-myosin cytoskeleton. As a critical component of the migration machinery, the molecular motor protein nonmuscle myosin II (myosin II) has long been a subject of scientific inquiry. It is now generally accepted that the contractile forces generated by myosin II contribute directly or indirectly to every step in migration. Interestingly, three isoforms of myosin II (myosin IIA, IIB and IIC) have been identified, and although each isoform performs the same basic molecular functions, recent findings suggest that the different myosin II isoforms make unique contributions to the motile process. In this dissertation work I used RNA interference technology to specifically deplete cells of myosin IIA and IIB in order to characterize the distinct migration phenotypes associated with loss-of-function of each individual isoform. Surprisingly, I found that the two myosin II isoforms perform not only distinct but opposing functions in cell migration, with myosin IIA and IIB normally inhibiting and facilitating proper cell movement, respectively. Furthermore, using pharmacological and microscopy techniques, I investigated the cellular mechanisms allowing for isoform-specific function. My results provide evidence for at least two isoform-specific regulatory mechanisms, namely selectivity in signaling pathways and subcellular distribution. A particularly significant finding is the identification of the different assembly properties of myosin IIA and IIB as the key element responsible for directing isoform-distinct distribution. Together the data presented herein represent a considerable advance in our understanding of the distinct functions and regulation of myosin II in cell motility.