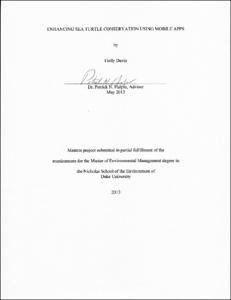 View / Download
4.0 Mb
Date
Author
Davis, Holly
Advisor
Halpin, Patrick N.
Repository Usage Stats
396
views
602
downloads
Abstract
With the advent of mobile devices, opportunities exist for increased citizen science data collection. This study evaluates options for how smartphones and tablets can enhance existing sea turtle conservation efforts in North Carolina and Puerto Rico. Social media applications (Twitter, Flickr, and YouTube), productivity apps (Google Drive’s sheets and forms), and creation of a stand-alone application are evaluated with an eye toward a streamlined user experience. The goal of the project is to create a social media protocol or mobile application that aids sea turtle volunteers in collecting nesting and stranding data in the field and stores that information in a database on a remote server. Outputs from the database include daily-generated .csv and .kml files. An evaluation of needs for North Carolina’s and Puerto Rico’s sea turtle volunteer networks showed that for Puerto Rico, any sea turtle nesting data collected needs to remain private to prevent poachers from using the information to raid nests for eggs. This consideration significantly changed the nature of the project from start to finish. Additionally, researchers in both areas require detailed data collection. Since some locations are remote, any protocol or app developed needs to work when no cell phone or wifi signal is available. These constraints led to a custom stand-alone app as the best-fit solution. The results of a survey of mobile device ownership and usage by sea turtle volunteers showed that iOS devices (iPhone and iPad) and Android phones and tablets where the most popular mobile devices. The application, called Caretta, uses the open source PhoneGap development framework to allow for easier modification of a single HTML5, CSS3 and JavaScript code base to create mobile apps for all kinds of devices, independent of platform. By quickly creating an app that could be deployed to iOS devices as well as Android, Blackberry, Windows Phone and others, the opportunity to engage more people in citizen science is increased significantly. Though this study focuses on North Carolina and Puerto Rico, the findings can be applied to any location and any discipline where smartphone or tablet data collection would be useful.
Type
Master's project
Department
Nicholas School of the Environment and Earth Sciences
Subject
Sea turtle data collection, mobile device, PhoneGap, citizen science, smartphone, tablet
Permalink
https://hdl.handle.net/10161/6605
Citation
Davis, Holly (2013). Enhancing Sea Turtle Conservation Using Mobile Apps. Master's project, Duke University. Retrieved from https://hdl.handle.net/10161/6605.
Collections
More Info
Show full item record