Behavioral Economics and the Affordable Care Act: What States Should Know As They Design Health Insurance Exchanges 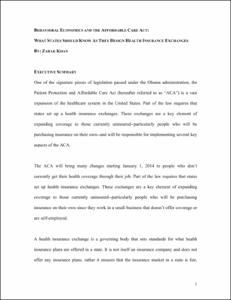 Files
Executive Summary
68.0 Kb
Master's Thesis
170.5 Kb
Date
Author
Khan, Zarak
Advisor
Ubel, Peter A
Repository Usage Stats
922
views
1,174
downloads
Abstract
EXECUTIVE SUMMARY One of the signature pieces of legislation passed under the Obama administration, the Patient Protection and Affordable Care Act (hereafter referred to as “ACA”) is a vast expansion of the healthcare system in the United States. Part of the law requires that states set up a health insurance exchanges. These exchanges are a key element of expanding coverage to those currently uninsured--particularly people who will be purchasing insurance on their own--and will be responsible for implementing several key aspects of the ACA. The ACA will bring many changes starting January 1, 2014 to people who don’t currently get their health coverage through their job. Part of the law requires that states set up health insurance exchanges. These exchanges are a key element of expanding coverage to those currently uninsured--particularly people who will be purchasing insurance on their own since they work in a small business that doesn’t offer coverage or are self-employed. A health insurance exchange is a governing body that sets standards for what health insurance plans are offered in a state. It is not itself an insurance company and does not offer any insurance plans, rather it ensures that the insurance market in a state is fair, transparent, competitive, and provides adequate benefits. It also provides an online marketplace where people can log on and purchase insurance. The way in which information is presented to people can significantly affect their decisions. When presented with the complicated information comprising a health insurance plan, people can struggle to process all that information. At times, they can be overwhelmed by the decision and choose a sub-optimal insurance plan. The ACA allows significant latitude in exchange design and research from the field of behavioral economics should play a role. Challenging the traditional economic assumption that humans are perfect utility-maximizing machines, behavioral economics melds psychology and neo-classical economics to understand how people make decisions. By understanding the places where people often struggle to make choices, policymakers can develop strategies to mitigate those problems. These recommendations are divided into two sections. The first two are relevant because the state has opted out of designing its own health insurance exchange. The next three are relevant to the design of an exchange and will be important if the state decides, after several years of federal control, that it wants to reassert its authority over its exchange. The first two deal with the responsibilities and rights of the state—both retained and foregone. The next three pertain to behavioral economics and the user interface of the exchange, a small but critical piece of the puzzle. 1. Enrollment will be key. North Carolina has opted to let the federal government set up their health insurance exchange (HIX). This means that the key responsibility retained by the state will be in enrolling residents. This is critical as one of the key assumptions behind a functioning market is full participation (hence the individual mandate). 2. North Carolina could set up a more effective HIX than the federal government. The federal government is overwhelmed and struggling to set up exchanges around the country. The state could be a more appropriate and responsive steward of this function. 3. Choice matters. Limits on the number of choices a person must make can lead them to a better decision (and one they feel better about). If, however, the limits are so prohibitive that they lead to a monopoly, they would be a hindrance to efficiency. 4. Setting robust minimum standards is important. Research on the Massachusetts HIX reveals that a majority of their enrollees choose the lowest level of coverage. As such, setting minimum standards is critical, as it is likely that a majority of enrollees will default to this option. 5. Issues of literacy and numeracy will affect consumers’ decisions. Consumers often do not understand the definitions of terms used in health plans. Reworking these definitions and then testing them for comprehensibility is a simple step that can make a great difference in how people choose their insurance.
Type
Master's project
Department
The Sanford School of Public Policy
Subject
Behavioral Economics
HIX
Health Insurance Exchange
Affordable Care Act
ACA
Health care
Permalink
https://hdl.handle.net/10161/6606
Citation
Khan, Zarak (2013). Behavioral Economics and the Affordable Care Act: What States Should Know As They Design Health Insurance Exchanges. Master's project, Duke University. Retrieved from https://hdl.handle.net/10161/6606.
Collections
More Info
Show full item record