Numerical Modeling of Coastline Evolution in an Era of Global Change 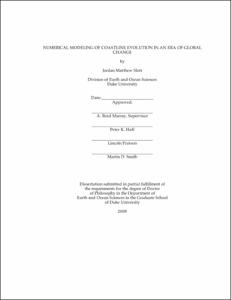 Scientists expect temperatures on Earth to get substantially warmer over the course of the 21st century, causing storm systems to intensify and sea-level rise to accelerate--these changes will likely have dramatic impacts on how the coastlines of tomorrow will evolve. Humans are also playing an increasingly important role in shaping Earth's coastal systems. Coastal scientists have only a general understanding of how these three factors--humans, storms, and sea-level rise--will alter the evolution of coastlines over the coming century, however. I conduct numerical modeling experiments to shed light on the relative importance of these factors on the evolution of coastline geomorphology.

In a series of experiments using a numerical model of large-scale (1 to 100's km) and long-term (years to centuries) coastline evolution that results from gradients in alongshore sediment transport, I explore how the patterns and rates of shoreline erosion and accretion are affected by shifts in 'wave climate' (the mix of influences on alongshore sediment transport of waves approaching from different directions) induced by intensified storm systems and the direct manipulation of the shoreline system by humans through beach nourishment (periodically placing sand on an eroding beach). I use a cuspate-cape coastline, similar to the Outer Banks, North and South Carolina, USA, as an important case study in my experiments. I observe that moderate shifts in the wave climate can alter the patterns of shoreline erosion and accretion, potentially increasing migration rates by several times that which we see today, and nearly an order-of-magnitude larger than sea-level rise-related erosion alone. I also find that under possible wave climate futures, beach nourishment may also induce shoreline change on the same order of magnitude as does sea-level rise.

The decision humans make whether or not to nourish their beach often depends upon a favorable economic outcome in the endeavor. In further experiments, I couple a cost-benefit economic model of human decision making to the numerical model of coastline evolution and test a hypothetical scenario where two communities (one 'rich' and one 'poor') nourish their beaches in tandem, under different sets of economic and wave climate parameters. I observe that two adjacent communities can benefit substantially from each other's nourishment activity, and these effects persist even if the two communities are separated by several tens of kilometers.