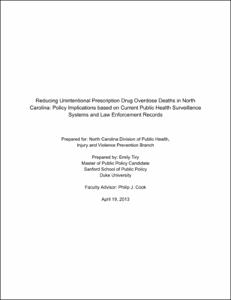 View / Download
552.9 Kb
Date
Author
Tiry, Emily
Advisor
Cook, Philip J
Repository Usage Stats
371
views
513
downloads
Abstract
Executive Summary Background In North Carolina, the number of deaths from unintentional drug overdoses has increased more than 300 percent in just over a decade, from 279 in 1999 to 1,140 in 2011. An increasing proportion of these deaths come from prescription drugs as opposed to illicit drugs. In particular, prescription opioids are involved in a majority of unintentional drug overdose deaths. Prescription drug overdose deaths are preventable, yet the death toll continues to increase. This dramatic increase is a relatively new phenomenon and the regulatory structure around prescription drugs differs in important ways from the one around illicit drugs. With that in mind, the goal of this paper is to examine and evaluate the current public health surveillance systems and law enforcement records with regard to unintentional prescription drug overdoses in North Carolina. In particular, it looks at the extent to which these systems record information about the source of the drugs involved in the overdose. Before we can design effective interventions to reduce unintentional overdoses, we need to know how victims obtain the drugs that contribute to their deaths, as well as whether and where that information exists. Policy Options There are many paths through which those at risk of a fatal prescription drug overdose may obtain the drugs that contribute to their deaths, including through legitimate prescriptions; doctor shopping; non-legitimate prescriptions (“pill mills”); receiving, purchasing, or stealing from family or friends; and purchasing on the street. Each path requires a different type of intervention; therefore, determining the relative importance of each path will guide recommendations for improving existing policies or implementing new ones. Several programs have already been implemented in North Carolina, each primarily addressing one source. These include Project Lazarus (legitimate prescriptions), the North Carolina Controlled Substances Reporting System (CSRS) (doctor shopping), the State Bureau of Investigation’s Diversion and Environmental Crimes Unit (non-legitimate prescriptions and purchasing on the street), and Operation Medicine Cabinet (receiving or stealing from family or friends). Data and Methods Using a data set compiled by the North Carolina Division of Public Health’s Injury and Violence Prevention Branch, I analyzed the characteristics of the unintentional pharmaceutical-related overdose deaths in North Carolina from 2010. This data set included information from death certificates, medical examiner files, and controlled substance prescription records. The analysis included categorizing cases according to the number and currency of controlled substance prescriptions as well as according to the types of drugs contributing to death. I also looked for evidence of diversion among the cases. This included identifying doctor shopping using three different criteria as well as identifying other types of diversion from information available in the medical examiner narratives. Finally, I evaluated how providers, pharmacists, and the State Bureau of Investigation are using the North Carolina Controlled Substance Reporting System. Results Of the 707 cases that were analyzed, unintentional prescription overdose victims were more likely to be male, white, and/or between the ages of 35 and 54. Over half of the cases (57 percent) had at least one current prescription for a controlled substance at the time of death. Additionally, of those who did have at least one current prescription, 72 percent had a current prescription for a drug that also contributed to their deaths. Opioids were by far the most common type of drug to contribute to death. Overall, opioids contributed to 94 percent of deaths, followed by benzodiazepines at 28 percent. In fact, all of the top ten specific drugs (e.g., oxycodone, alprazolam) to contribute to death were either an opioid or a benzodiazepine. Opioids and benzodiazepines were also more likely to contribute to death for those cases who had at least one current prescription for a contributory drug than for those who did not. The three doctor shopping criteria produced widely varying estimates, from a low of 16 cases using medical examiner narratives to a high of 252 cases using a criterion of filling prescriptions from at least five different prescribers in one year. The medical examiner narratives contained information about diversion sources for 78 cases, the most common source mentioned being receiving or stealing from family or friends. Fewer than half of the cases were looked up in the CSRS by anyone in the year before their deaths, which may have contributed to excessive prescriptions. Conclusions and Policy Implications Although North Carolina currently has a system in place that is intended to ensure that controlled substances are prescribed and used safely, unintentional overdoses from these drugs continue to increase. Though they are not definitive, these results provide at least preliminary evidence about where the system is failing, which can in turn guide potential policy changes. The following recommendations are based on my evaluation of the current public health surveillance system and law enforcement records: • Promote and evaluate increased use of the CSRS among prescribers and pharmacists when prescribing or dispensing an opioid or benzodiazepine. • Develop criteria to identify unusual or suspicious patterns of prescribing by providers. • Develop police investigation guidelines for collecting consistent information related to intent and to the source of the contributing drug(s). • Create a comprehensive surveillance system to monitor and analyze prescription drug overdose trends over time. However, any policy to reduce overdose deaths should minimize a “chilling effect,” which would unnecessarily restrict access to these drugs for those who have a legitimate need for them. Additionally, a comprehensive strategy to reduce overdose deaths should also attempt to reduce spillover from prescription drug overdoses to heroin overdoses, as well as address the demand side of prescription drug abuse.
Type
Master's project
Department
The Sanford School of Public Policy
Subject
public health, prescription drugs, overdoses, surveillance
Permalink
https://hdl.handle.net/10161/6617
Citation
Tiry, Emily (2013). Reducing Unintentional Prescription Drug Overdose Deaths in North Carolina: Policy Implications based on Current Public Health Surveillance Systems and Law Enforcement Records. Master's project, Duke University. Retrieved from https://hdl.handle.net/10161/6617.
Collections
More Info
Show full item record