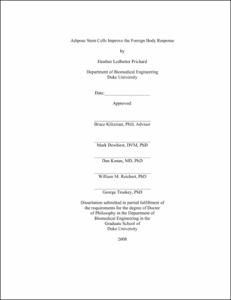 Many implanted devices fail due to the formation of an avascular capsule. Fat is known to promote healing and vascularization. It is possible that isolating and attaching ASCs (adipose stem cells) to an implanted device improves the healing in the adjacent tissue.

Various attachment methods were studied, and the fibronectin treatment was found comparable to or better than other treatments. Next, bare and ASC coated polyurethane were implanted into rats. The fibrous capsule surrounding the bare polyurethane was thicker and contained more collagen at 8 weeks. Additionally, the microvessel density in the tissue surrounding the ASC coated polyurethane was significantly higher at 4 and 8 weeks. Quantification of glucose sensor response following ASC attachment for 1 week found no measurable significant differences in function.

The final experiments were performed to identify a possible mechanism that adipose tissue uses to alter the foreign body response. In vitro experiments showed that VEGF (VEGF-A specifically) secretion following ASC attachment to polyurethane was 10-20 times higher than with fibroblast attachment after three days and 40-70 times higher after six days. This high secretion of VEGF would likely have in vivo physiological affects on microvasculature.

In conclusion, the attachment of ASCs to polyurethane reduced the thickness and collagen content of the fibrous capsule surrounding ASC coated implants and increased the microvessel density in adjacent tissue. In addition, ASC attachment did not enhance glucose sensor function, nor did it decrease the glucose concentration in the adjacent tissue. Finally, ASCs were found to secrete high amounts of pro-vascular cytokines, which likely plays a key role in the observed improvement of the foreign body response.