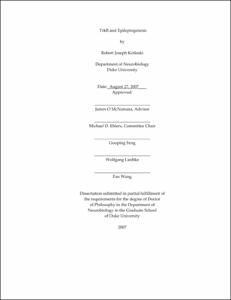 Discovering the cellular and molecular mechanisms underlying the pathophysiology underlying the development of epilepsy is key to the creation of improved treatments. The neurotrophins and their receptors, in particular BDNF and TrkB, are likely candidates to be involved in the process by which a normal brain becomes epileptic (epileptogenesis). The work presented in the dissertation has investigated the hypothesis that TrkB is a central factor in epileptogenesis in multiple animal models of epilepsy.

Conditional deletion of TrkB in the Syn-Cre TrkB-/- mouse prevented nearly all epileptogenesis in the kindling model, despite the ability to have a tonic-clonic seizure. Reduction of TrkB de novo in mature Act-CreER TrkB-/- mice also delayed epileptogenesis in the kindling model. Additionally, Syn-Cre TrkB+/- and Act-CreER TrkB-/- mice had impaired persistence of the hyperexcitable state following kindling. It remained unclear from these findings whether reduction of TrkB during and/or following induction of kindling was responsible for the impaired persistence. The inducible Act-CreER TrkBflox/flox mice were used to reduce TrkB only after the fully kindled state had been reached and demonstrated that loss of TrkB after completion of kindling impairs persistence of the hyperexcitable state.