The question of 'race' in the pre-colonial southern Sahara 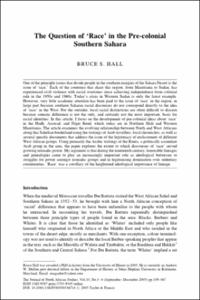 View / Download
175.4 Kb
Date
Author
Hall, Bruce S
Repository Usage Stats
168
views
368
downloads
Abstract
One of the principle issues that divide people in the southern margins of the Sahara Desert is the issue of 'race'. Each of the countries that share this region, from Mauritania to Sudan, has experienced civil violence with racial overtones since achieving independence from colonial rule in the 1950s and 1960s. Today's crisis in Western Sudan is only the latest example. However, very little academic attention has been paid to the issue of 'race' in the region, in large part because southern Saharan racial discourses do not correspond directly to the idea of 'race' in the West. For the outsider, local racial distinctions are often difficult to discern because somatic difference is not the only, and certainly not the most important, basis for racial identities. In this article, I focus on the development of pre-colonial ideas about 'race' in the Hodh, Azawad, and Niger Bend, which today are in Northern Mali and Western Mauritania. The article examines the evolving relationship between North and West Africans along this Sahelian borderland using the writings of Arab travellers, local chroniclers, as well as several specific documents that address the issue of the legitimacy of enslavement of different West African groups. Using primarily the Arabic writings of the Kunta, a politically ascendant Arab group in the area, the paper explores the extent to which discourses of 'race' served growing nomadic power. My argument is that during the nineteenth century, honorable lineages and genealogies came to play an increasingly important role as ideological buttresses to struggles for power amongst nomadic groups and in legitimising domination over sedentary communities. 'Race' was a corollary of the heightened ideological importance of lineage. © 2005 Taylor & Francis.
Type
Journal article
Permalink
https://hdl.handle.net/10161/6642
Published Version (Please cite this version)
10.1080/13629380500336714
Publication Info
Hall, Bruce S (2005). The question of 'race' in the pre-colonial southern Sahara. Journal of North African Studies, 10(3-4). pp. 339-367. 10.1080/13629380500336714. Retrieved from https://hdl.handle.net/10161/6642.
This is constructed from limited available data and may be imprecise. To cite this article, please review & use the official citation provided by the journal.
Collections
More Info
Show full item record

Associate Professor in the Department of History
My first book, A history of race in Muslim West Africa, 1600-1960 (New York: Cambridge University Press, 2011), is about the development of ideas about racial difference along the West African Sahel. The research for this project was focused in and around the Malian town of Timbuktu. My current research centers on a nineteenth-century commercial network that connected Timbuktu with Ghadames (Libya), and which involved a number of literate slaves as commercial agents.
This author no longer has a Scholars@Duke profile, so the information shown here reflects their Duke status at the time this item was deposited.