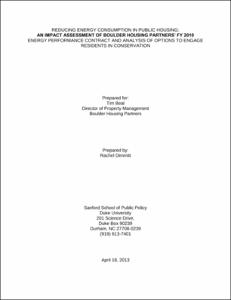 View / Download
834.4 Kb
Date
Author
Dimmitt, Rachel
Advisor
Hamilton, James T
Repository Usage Stats
374
views
546
downloads
Abstract
In an attempt to further its goals of environmental stewardship, Boulder Housing Partners, the public housing authority for Boulder, CO, has made a public commitment to reduce the electricity consumption of its public housing portfolio enough to attain net-zero electricity consumption, or have all consumption offset by the on-site generation of renewable power. Furthermore, Boulder Housing Partners strives to surpass the City of Boulder’s stringent energy efficiency standards, which far exceed state and federal efficiency requirements for rental housing. As a result, Boulder Housing Partners recently decided to invest heavily in energy efficiency measures via an Energy Performance Contract (EPC) executed by Johnson Controls, Inc. in fiscal year (FY) 2010. Initial results suggest that properties in the treatment group— those which received the EPC work—experienced an overall decline in electricity consumption. Average monthly electricity consumption for the treatment group declined by 17.44% from FY 2009 to FY 2011, while average monthly electricity consumption increased by 7.96% for the control group. However, a series of simple t-tests suggests the absence of any statistically significant change. This is confirmed by a difference-in-difference analysis. The EPC had an effect on the treatment group to the magnitude of -2701.865 kWh per month and was not statistically significant. In order to verify that outliers in the treatment group did not substantially affect these results, the difference-in-difference analysis was repeated after dropping the outliers from the dataset. This resulted in an increase in the effect of the EPC on the treatment group to -4284.125 kWh per month and an increase in statistical significance from 0.88 to 0.122. Although this is a substantial change, 0.122 remains well past the standard 0.05 threshold for statistical significance. Consequently, it does not change the conclusions or interpretation of the results. In order to further organization progress toward the net-zero electricity consumption goal, it is recommended that BHP pursue a combination of the installation of sub-meters, the provision of monthly notice to residents detailing their previous month's usage and performance compared to other property residents, the institution of a monthly or annual savings sharing program, and solicitation of written commitments to achieving conservation goals from residents. If the organization so chose and resources permitted, they also could pursue information sessions and the dissemination of written materials. The recommended incentive- and information-based interventions, as well as additional building upgrades, should allow Boulder Housing Partners to capture substantive additional increases in energy savings, while decreasing greenhouse gas emissions.
Type
Master's project
Department
The Sanford School of Public Policy
Subject
Residential energy efficiency
Low-income housing
Occupant behavior
Energy conservation
Split incentives
Public housing
Permalink
https://hdl.handle.net/10161/6643
Citation
Dimmitt, Rachel (2013). REDUCING ENERGY CONSUMPTION IN PUBLIC HOUSING: AN IMPACT ASSESSMENT OF BOULDER HOUSING PARTNERS’ FY 2010 ENERGY PERFORMANCE CONTRACT AND ANALYSIS OF OPTIONS TO ENGAGE RESIDENTS IN CONSERVATION. Master's project, Duke University. Retrieved from https://hdl.handle.net/10161/6643.
Collections
More Info
Show full item record