How could the Foreign Language Teaching and Research Press cooperate with Beijing MTR Corporation to launch a reading promotion program via subway advertising? 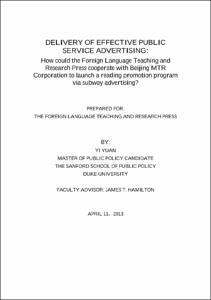 View / Download
1.1 Mb
Date
Author
Yuan, Yi
Advisor
Hamilton, James T
Repository Usage Stats
1,043
views
10,091
downloads
Abstract
POLICY QUESTION (PAGE 1) How could the Foreign Language Teaching and Research Press (FLTRP) cooperate with Beijing MTR Corporation (BJMTR) to launch a reading promotion program via subway advertising? BACKGROUND AND PROBLEM STATEMENT (PAGE 1) Literacy, essential to social and human development, is considered an instrument of empowerment to improve one’s health, one’s income, and one’s relationship with the world (UNESCO). In the past decade, the adult literacy rate has increased at a global level while millions of people are still struggling with this basic skill. Despite the growth of literacy, currently both adults and juveniles seem to be less interested in reading, especially under the influence of the development and popularity of mass media, such as TV, internet and radios. Many countries have launched various national and local campaigns to promote reading among the public. In China, the reading rate of books in 2011 was below the rate in 1999 due to a dramatic decline from 1999 to 2005. Average amount of reading for juveniles in urban areas is much larger than the rate in rural areas; and less than one-third of young children are willing to read independently. Like governments in other countries in the world, the Chinese government also launched campaigns to promote reading since 1997. A policy of Nationwide Reading was implemented by the government in 2006 to enhance citizens’ ideological, moral and cultural qualities. In response, the FLTRP hope to cooperate with BJMTR, who operates the Beijing Metro Line 4 and will provide free advertising space at the Renmin University station, Haidian Huangzhuang station and Zhongguancun station along the Line 4, to promote reading among the general public, especially subway commuters and children. The message of this campaign will be mainly delivered via subway advertising, and supported by on-line interaction and large off-line events. METHODOLOGY (PAGE 4) This project involves qualitative analysis and will design strategies through literature review, case studies and interviews. Literature review part will rely on academic papers and theories to define the best practices by examining the public service advertising (PSA) or education programs via transportation system or other high-tech tools (e.g., subway, smart phones and mobile TV). Three case studies will be included in this section to examine the best practices from foreign and domestic efforts, and discuss the strengths and concerns that could be applied to the campaign. The results and lessons from the interviews with FLTRP officials will be included in the alternative and analysis sections. SUBWAY PSA AND READING PROMOTION ACTIVITIES (PAGE 5) This part aims at analyzing factors that influence the message delivery of PSAs and subway advertisements from different aspects. First, the paper discusses the effect of celebrities and spokescharacters in PSA and the effectiveness of PSA. Second, the paper focuses on the features and different effects of subway advertisement forms, including the tunnel advertisement, posters and shelter-sized diorama, escalator squares, brand trains, mobile TV and station domination. Recall rate of the advertisements is often used to examine the advertising effects. CASE STUDIES (PAGE 10) In this part, three cases from Mexico, China and the US are discussed to learn the best practices and provide guidance to the FLTRP reading campaign. The case studies show various strengths to organize a successful campaign, including using various and lasting promotion approaches, involving all stakeholders and celebrities, eliminating potential barriers for the participants, conducting scientific research and actively interacting with media. ALTERNATIVES AND CONCERNS (PAGE17) The campaign aims at enhancing people’s awareness of reading, encouraging people to read more and building a long-run cooperation with BJMTR which benefits branding of both companies. More specifically, the campaign has the following expected results that reflect the achievement of the goals:  Recall rate of the PSAs is above 50%, which means that more than 50% of respondents in evaluation survey could remember seeing the reading promotion advertisements.  The kick-off event has more than 1000 participants.  Collect more than 2000 books from the book drop-off spots.  Receive more than 5000 e-book downloads. To achieve the goals and expected results, the following alternatives are provided: 1. Choose one form of Subway advertising  Use print advertisements such as posters and shelter-sized diorama in transfer walkways, platforms and escalators.  Use station domination.  Use mobile TV or tunnel advertisement. 2. Promote e-books using Quick Response Code (QR Code) on posters. 3. Choose one form of Off-line events  Organize book donation events.  Organize BookCrossing events.  Organize book borrow events. 4. Invite school students to kick-off event where they will make a commitment to read at least one book during the three months. 5. Invite famous writers to participate in events or use celebrity endorsers. 6. Conduct active communication plan on different media. 7. Conduct scientific research to assess and evaluate the campaign. RECOMMENDATIONS (PAGE 27) 1. Combine the walkway advertising, platform posters and Shelter-sized Diorama, and escalator squares together to present the message. 2. Promote e-book reading by putting the QRCode on platform posters and giving out gift cards for on-line forum at the events. 3. Conduct Book Donation event during the whole project. 4. Launch a kick-off event for children and other subway commuters where they will make a commitment to read at least one book between June and August. 5. Invite famous writers to participate in events or use celebrity endorsers. 6. Actively perform on social media and other tradition media, including Sina Weibo, on-line forum, newspaper, on-line news and TV news. 7. Conduct scientific research to assess and evaluate the campaign.
Type
Master's project
Department
The Sanford School of Public Policy
Subject
Public service advertising
Subway advertising
Reading promotion campaign
Corporate social responsibility
Communication
Permalink
https://hdl.handle.net/10161/6678
Citation
Yuan, Yi (2013). How could the Foreign Language Teaching and Research Press cooperate with Beijing MTR Corporation to launch a reading promotion program via subway advertising?. Master's project, Duke University. Retrieved from https://hdl.handle.net/10161/6678.
Collections
More Info
Show full item record