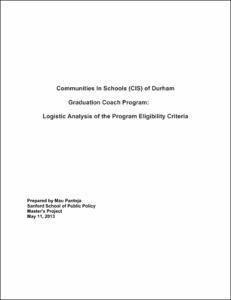 The purpose of this project was to investigate the extent to which Communities In Schools (CIS) of Durham is using the appropriate eligibility criteria for admission into its graduation coach program. The study provides information that could help the organization better target at-risk students for coaching services by answering the following research question: Is CIS of Durham’s eligibility methodology appropriate for selecting students into its graduation coach program?

II. Description of CIS of Durham

Created in 1992, CIS of Durham is a member of Communities In Schools, one of the largest dropout prevention networks in the United States. The organization uses the graduation coach program to help at-risk students stay in school and graduate. The program includes college tours, mentoring, skills development, and internships (level II services) for a select number of students. The program also provides school-wide services, including basic needs resources and health screenings (level I services). All services are voluntary.<p/> <p>CIS of Durham targets students for level II services that it has identified as being at risk of dropping out. The organization selects students using attendance, academics, and misbehavior measures. The organization divides these predictors into risk levels (see Table 1). Any student who falls in the Low, Medium, or High risk levels in two out of the three predictors qualifies for the program.

I used data from the North Carolina Education Research Data Center (NCERDC) for descriptive and logistic analyses of the graduation coach program’s eligibility criteria. I identified 10th grade students from the Durham Public Schools in the 2009-2010 academic year and determined if they had dropped out by the end of their senior year. Descriptive analysis: I divided the student sample into three groups: all 10th graders, students eligible for the program, and dropouts. For each group, I provided summary statistics on the percent of students in every risk level for the three CIS of Durham indicators. I also described each group’s ethnic and gender composition. Logistic analysis: I used logistic regression (logit) to determine if the CIS of Durham indicators are good predictors of dropping out. The logit estimates the probability that an event will occur. I controlled for gender, ethnicity, and whether or not a student received free/reduced price lunch.

I divided each CIS of Durham indicator into categories that correspond to the risk levels the organization uses to admit students into the program. This division allowed me to determine if the odds of dropping out are greater at higher risk levels.

I identified 1,845 10th graders from five traditional Durham schools in 2009-2010. A total of 110 students dropped out at least once by the end of their senior year. Under the CIS of Durham eligibility criteria, 276 students (15%) qualified for the program. Ethnicity: Eligible students and dropouts tended to be minorities. While 56% of 10th graders were black, 73.2% of eligible students belonged to this group. 62% of dropouts were black and 21% were Hispanic students. White students comprised only 7% of dropouts even though they made up 26% of the sample.

Suspensions: 75.5% of 10th graders had no suspensions (Outside risk). By comparison, nearly 76.5% of eligible students had 1-4 suspensions (Low-High risk). For dropouts, as the risk levels increased, the percent of students in each level decreased, except for the Not Included level. The data showed a substantial jump in the number of dropouts with 5 or more suspensions.

GPA: 62% of 10th graders had a C average grade or better (Outside risk). 76% of eligible students had a GPA between 1.01 and 2.0 (Low-Medium risk). 44.5% of dropouts had a GPA below 1.0, indicating that these students tend to perform worse academically than their peers.

The logistic analysis indicated that CIS of Durham could enhance the program’s admission criteria. I recommend eliminating the two-out-of-three rule by dropping suspensions since the data demonstrated that absences and suspensions had a redundant effect on dropping out. Gender, ethnicity, and free/reduced price lunch showed no significant effect.

The data showed that the GPA ranges of the risk levels are correctly denominated for this predictor. The odds of dropping out increase as GPA decreases. I propose no changes to this indicator. On the other hand, the ranges of the risk levels for absences could be improved. In particular, the Medium and High risk categories did not have a significant effect on the odds of dropping out compared to some of the other levels. I recommend changing the ranges as shown in Table 2. The suggested new ranges are better denominated since higher absences risk levels are associated with statistically significant higher odds of dropping out.

The results of this project cannot be generalized beyond the design of the study and its assumptions. CIS of Durham should treat the study’s recommendations as a general rule of thumb. Graduation coaches should make every effort to assess the individual needs of students.