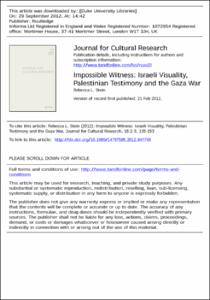 View / Download
209.0 Kb
Date
Author
Stein, RL
Repository Usage Stats
242
views
331
downloads
Abstract
This article studies Israeli news coverage (chiefly via newspapers and television) of the Gaza war of 2008-2009, with a focus on what the national media withheld from its consuming publics - namely, depiction of the extent of Israeli-inflicted violence upon Gazan people and infrastructure. At the core of this article is a study of an anomalous instance of Palestinian testimonial which was broadcast live on Israeli national television - this in an Israeli media context in which Palestinian eyewitness accounts were largely occluded from public view. How, the article asks, are we to make sense of this scene of televised Palestinian trauma and the enormous attention it garnered among Israeli publics? The author's reading detours through the work of Israeli cultural theorist Ariella Azoulay with her insistence that the study of images and visuality in the Israeli context be attentive to the inextricable interplay between ways of seeing and national ideologies. In conclusion, the author proffers a reading which folds this scene of televised testimonial back into the hegemonic Israeli field of perception. © 2012 Copyright Taylor and Francis Group, LLC.
Type
Journal article
Permalink
https://hdl.handle.net/10161/6688
Published Version (Please cite this version)
10.1080/14797585.2012.647749
Publication Info
Stein, RL (2012). Impossible Witness: Israeli Visuality, Palestinian Testimony and the Gaza War. Journal for Cultural Research, 16(2-3). pp. 135-153. 10.1080/14797585.2012.647749. Retrieved from https://hdl.handle.net/10161/6688.
This is constructed from limited available data and may be imprecise. To cite this article, please review & use the official citation provided by the journal.
Collections
More Info
Show full item record Professor of Cultural Anthropology
My research studies linkages between cultural and political processes in Israel in relation to its military occupation and the history of Palestinian dispossession. I am the author of Screen Shots: State Violence on Camera in Israel and Palestine (Stanford University Press, 2021) on the politics of military occupation in the age of the global smartphone camera; <a href="http://www.sup.org/b