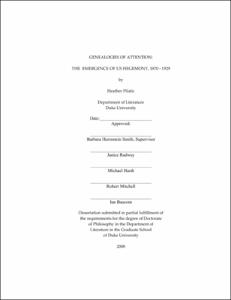 This dissertation is at once a historical study of the emergence of U.S. hegemony through the lens of discourses and techniques of attention, and a sustained series of methodological reflections centering on how to write and think about historical dynamics of causality. Methodological emphasis is first on establishing a reconceptualization of the dynamics of scientific and commercial accumulation animating capitalist modernity. From there, this study maps the emergence of two intersecting truth technologies that I argue are central to the peculiar ways in which U.S. corporate capitalism has worked over the long twentieth century. These apparatuses of not-only scientific truth are the psychological problematic of attention as a model enabling the representation of, and intervention in, human cognition, and the Marginalist visualization of "the economy" as a welfare equilibrium.

Both technologies emerged in the final decades of the nineteenth century along with the trans-Atlantic proliferation of research universities, and subsequent re-organizations of the material bases, and representational strategies and practices, of authoritative truth-making. In the U.S., these developments effected a particular displacement and broad re-orientation of previously theological frameworks for understanding human cognition and the "Natural" order of society. I argue that one consequence of this displacement and re-orientation has been the formation of a governmental rationality of the U.S. "Market Republic" that takes the welfare equilibrium of a mass-market economy as its telos and idiom of rational order, while simultaneously rendering civic freedom a matter of choices made after paying the right kind of (primarily economic or scientific) attention. As my examples indicate, this rationality is not necessarily state-based, but rather unfolds medially as a series of conceptual-discursive and socio-technical conventions in three primary institutional sites of attention-gathering and market-making: early mass-circulation print culture, systematic corporate management, and modern research universities. In all three sites, my focus is on communication technologies conceived as staging procedures for the socialization and accumulation of attention.

As mentioned above, my historical horizon of significance for these investigations is the emergence of U.S. hegemony between 1870 and 1929. By conceptualizing hegemony in terms of a nation's intermediating position as a dominant global "center of (commercial and intellectual/scientific) calculation," I keep in play a general conception of accumulation wherein knowledge, money, and indeed, human attention, are all forms of currency that have kept U.S. hegemony current throughout the long twentieth century (1870 - present). At stake in this alternative account of capitalist accumulation and scientific knowledge as tightly linked networks is not the by-now-standard conflation of scientific and class-based authority to "make things mean;" but rather, an insistently historical, constructivist, and indeed relativist conceptualization of how resources and power systematically concentrate and disperse in the very micro-processes by which people think "truth" with their eyes and hands -- by what they look at, interface with, are constituted in terms of, and so on. To accomplish this, the study proceeds by holding together Giovanni Arrighi's macrosociological theory of world historical capitalism, Bruno Latour's microsociological account of the power of "immutable mobiles" in (scientific) modernity, and Michel Foucault's genealogical conception of history as well as his theory of governmentality (the "conduct of conduct" through practices of freedom).