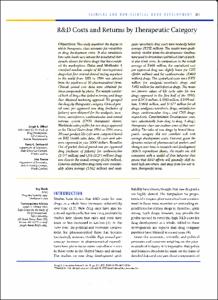 View / Download
2.4 Mb
Date
Authors
Dimasi, JA
Grabowski, HG
Vernon, J
Repository Usage Stats
330
views
424
downloads
Abstract
Objectives: This study examines the degree to which therapeutic class accounts for variability in drug development costs. It also scrutinizes how sales levels vary across the associated therapeutic classes for those drugs that have reached the marketplace. Data and Methods: A stratified random sample of 68 investigational drugs that first entered clinical testing anywhere in the world from 1983 to 1994 was selected from the pipelines of 10 pharmaceutical firms. Clinical period cost data were obtained for these compounds by phase. The sample consisted both of drugs that failed in testing and drugs that obtained marketing approval. We grouped the drugs by therapeutic category. Clinical period costs per approved new drug (inclusive of failures) were obtained for the analgesic/anesthetic, antiinfective, cardiovascular, and central nervous system (CNS) therapeutic classes. Worldwide sales profiles for new drugs approved in the United States from 1990 to 1994 over a 20-year product life cycle were computed based on IMS Health sales data. All costs and sales were expressed in year 2000 dollars. Results: Out-of-pocket clinical period cost per approved drug (inclusive of failures) for cardiovascular ($277 million) and CNS ($273 million) drugs was close to the overall average ($282 million). However, antiinfective drug costs were considerably above average ($362 million) and analgesic/anesthetic drug costs were modestly below average ($252 million). The results were qualitatively similar when the development timelines were used to determine capitalized (out-of-pocket plus time) costs. In comparison to the overall average of $466 million, the capitalized cost per approved drug was slightly lower for CNS ($464 million) and for cardiovascular ($460 million) drugs. The capitalized costs were $375 million for analgesic/anesthetic drugs and $492 million for antiinfective drugs. The mean net present values of life cycle sales for new drugs approved in the first half of the 1990s were $2434 million, $1080 million, $2199 million, $3668 million, and $4177 million for all drugs, analgesic/anesthetic drugs, antiinfective drugs, cardiovascular drugs, and CNS drugs, respectively. Conclusions: Development costs vary substantially from drug to drug. A drug's therapeutic class can explain some of that variability. The sales of new drugs by broad therapeutic category did not correlate well with average development costs. However, given the dynamic nature of pharmaceutical markets and changes over time in research and development (R&D) expenditure shares, the results are still consistent with a model of firm behavior that posits that R&D efforts will generally shift toward high net return, and away from low net return, therapeutic areas.
Type
Journal article
Permalink
https://hdl.handle.net/10161/6704
Collections
More Info
Show full item record