Best Practices for the Teaching of Critical Foreign Languages 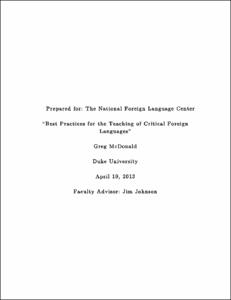 View / Download
207.3 Kb
Date
Author
McDonald, Gregory
Advisor
Johnson, Jim
Repository Usage Stats
641
views
450
downloads
Abstract
The United States currently has a foreign language deficit with, depending on the source, anywhere from 18 to 25 percent of Americans capable of speaking a foreign language. This number pales in comparison to that of many of the United States’ peer countries and has caused a number of problems. Regarding critical languages more specifically, the United States’ foreign language deficit has led to a number of national security-related problems. For instance, law enforcement and intelligence agencies lacked the necessary translators to make sense of terrorism-related intercepts they received before September 11th, 2001, intercepts that, if translated, could possibly have forestalled the attacks. After invading Afghanistan and Iraq, the problem persisted. The United States’ lack of facility in the relevant foreign languages prevented its military from effectively engaging with local populations, an important first step in conducting successful counter-insurgency operations. Similarly, a lack of Arabic, Dari and Pashto proficiency has prevented diplomats working in these two countries from interfacing with the public and generally doing their jobs as representatives of the United States. Foreign language study, mostly irrespective of the language being studied, is also important in a number of other ways. Some of the other benefits foreign language study confers are increased economic competitiveness globally, professional competitiveness on an individual level, increased academic achievement and improved cognitive processes. These are all benefits that individuals and countries forgo if they choose not to engage in foreign language study.
Type
Master's project
Department
The Sanford School of Public Policy
Permalink
https://hdl.handle.net/10161/6762
Citation
McDonald, Gregory (2013). Best Practices for the Teaching of Critical Foreign Languages. Master's project, Duke University. Retrieved from https://hdl.handle.net/10161/6762.
Collections
More Info
Show full item record