Denouncing White Privilege and Re-examining Marginality: Productions and Consequences of Difference between Travelers and non-Travelers in North Augusta, SC 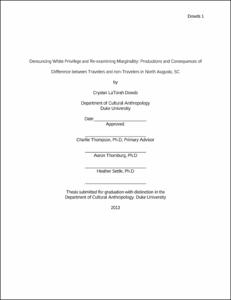 View / Download
497.2 Kb
Date
Author
Dowds, Crystan
Repository Usage Stats
359
views
3,730
downloads
Abstract
Can a group of affluent whites be considered marginal? This ethnographic study seeks to explore that question through the thoughtful consideration of the position of a group of Irish Travelers in a mid-size southern town. If categorization is necessary, how do white-skinned people sparse out distinctions among themselves, especially in a region heavily defined by relations of color. We will explore the primary methods of identifying a Traveler from a non-Traveler in North Augusta, likening the process-and its ensuing creation of essential meaning-to racial classification. Underlying the firsthand processes of identification are important structures of extended kinship shared between members for the same category. For whites, an important kinship bond is invisible privilege. Travelers-though white, skinned and affluent, are nonetheless a marked and visible entity to non-Travelers and are therefore placed outside of the invisible privilege of unmarked whiteness. Traveler visibility (behavioral markers) is experienced by mainstream whites as a rejection of kinship, and that rejection is a basis for the production of difference between the two groups. The particulars of the difference are given distinct form and undeniable truth through storytelling and representation. The resulting certitude is used to legitimate past and present actions of discrimination. Therefore, less visible forms of marginality should be considered to include those that may have faded, been circumvented, or inhabit discursive environments.
Type
Honors thesis
Department
Cultural Anthropology
Subject
Irish Travelers
marginality
white privilege
South Carolina
gypsies
Permalink
https://hdl.handle.net/10161/6768
Citation
Dowds, Crystan (2013). Denouncing White Privilege and Re-examining Marginality: Productions and Consequences of Difference between Travelers and non-Travelers in North Augusta, SC. Honors thesis, Duke University. Retrieved from https://hdl.handle.net/10161/6768.
Collections
More Info
Show full item record