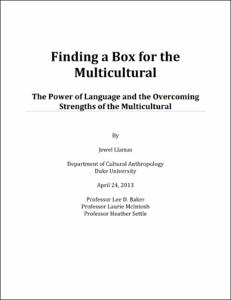 View / Download
875.8 Kb
Date
Author
Llamas, Jewel
Repository Usage Stats
296
views
409
downloads
Abstract
With each Census in the United States, the number of citizens who identify with multiple racial or cultural categories has slowly elevated. Nevertheless, this nation still lacks a language with which to identify such persons. This thesis project focuses on the power of accepted categories and labels on a group that has been denied them: the multicultural. This research delves into the lives of fourteen Duke Undergraduates who classify as multicultural, having parents from different cultural backgrounds. The ethnographic approach revealed that despite lacking their own of language on a national level and being pressured to think and behave in a pre-categorized fashion based on race and culture, the students I interviewed showed strength and cultural understanding in the face of their slow-to-change environment. The pressures they faced validate the need to rethink the implications that current categories of race and culture impose on the population of the United States, particularly its minority groups. Establishing nationally-recognized language for the multicultural would grant recognition and power to its growing population. However, this thesis does not argue for the creation of a multicultural “box” in which the culturally diverse can be placed. Labels and their characteristics created challenges for the multicultural. Thus, the interviews show that the multicultural may have wanted a label, but only because accepted categories suggest normalcy and their absence leaves one as “other.” On the other hand, not having their own classification exposed the drawback of conventional boxes for humanity: restriction and loss of individuality. The multicultural reveal the solution: the recognition of the limitations of established categories and the acceptance of the complexity of the human population. Being multicultural allows such individuals to realize this solution, granting them the ability to see the individual rather than the group, unlike so many of the people who appeared in their lives. Through the bridging of their social capital across cultural divides, the multicultural recognize that no one truly “fits” a label, relinquishing their need to have an established language for identification of their own.
Description
Cultural Anthropology Honors Thesis
Type
Honors thesis
Department
Cultural Anthropology
Subject
multiculturalism
race and culture
identity
language
Permalink
https://hdl.handle.net/10161/6769
Citation
Llamas, Jewel (2013). Finding a Box for the Multicultural: The Power of Language and the Overcoming Strengths of the Multicultural. Honors thesis, Duke University. Retrieved from https://hdl.handle.net/10161/6769.
Collections
More Info
Show full item record