Keystone XL: Down the Line 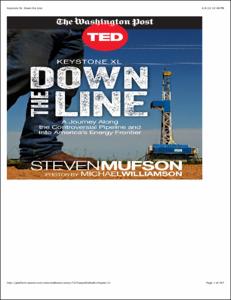 View / Download
50.8 Mb
Date
Author
Mufson, Steven
Repository Usage Stats
913
views
894
downloads
Abstract
The proposed Keystone XL pipeline has enflamed the bitter fight over America's energy future. Opponents of the 1,700-mile pipeline, which is designed to bring oil extracted from Canadian tar sands down to the US, say it represents a furthering of a dead-end oil-based energy policy that is unsustainable and poisonous, and have turned the permit requests to build the pipeline into an environmental litmus test for President Barack Obama. Supporters of the Keystone XL say it represents a step toward America's energy independence. Beyond the Beltway, the real story of this pipeline is one about American frontiers - the lengths to which we go for oil and the intrusive effects that quest causes all the way down the line. Steve Mufson, a reporter for The Washington Post, journeyed by car along the length of the proposed pipeline to see what this policy debate looks like at the ground level. Each segment of his trip touched on different issues: climate change and the oil sands; the U.S. energy trade with Canada; the North Dakota shale boom and its woes; prairie populism in Nebraska and pipeline politics; the Ogallala aquifer and the threat of leaks; Native Americans and their desire to protect land, water and burial sites along the old Trail of Tears; the fight of ranchers and farmers against a Canadian company’s right to eminent domain; and why both oil sands producers and Texas refiners want to see the pipeline completed. As long as the world relies on fossil fuels for transportation and industry, we will face unappealing choices. The Keystone XL pipeline serves as a larger metaphor, illuminating the vast energy infrastructure it takes to sustain the American lifestyle and the debatable choices we must make in pursuit of short-term comfort. Which risks, now and in the future, are we willing to take?
Type
Book
Permalink
https://hdl.handle.net/10161/6777
Collections
More Info
Show full item record