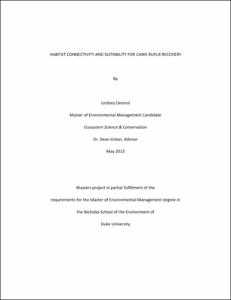 View / Download
4.2 Mb
Date
Author
Desmul, Lindsey
Advisor
Urban, Dean
Repository Usage Stats
407
views
1,048
downloads
Abstract
Red wolves historically lived throughout the southeastern United States. However their numbers were significantly reduced to the point of extinction in 1980. Prior to extinction, U.S. Fish and Wildlife managers were able to capture the last remaining 14 purebred wolves from the wild and put them into a captive breeding program. Once their captive population had reached a stable number, red wolves were reintroduced to the Albemarle Peninsula in North Carolina. While the reintroduction program has been successful, resulting in a growing wild population, the Albemarle Peninsula is threatened by sea level rise and there is a growing concern about habitat connectivity and the potential for wolves to move inland. In this study, a connectivity analysis was conducted for North Carolina to determine if urban growth and sea level rise might result in decreased potential for natural movement of the wolves over the next several decades. A geospatial analysis was conducted to identify possible bottlenecks to wolf dispersal, represented by pinch points in modeled dispersal corridors. These corridors entailed creating a ‘cost surface’ as a map of relative resistance to wolf dispersal, with cost reflecting several variables: land cover, urban density, housing density, road density, sea level rise, and slope. Using a model of sea-level rise created by The Nature Conservancy, a rise in sea level of 0.38 meters by 2050 would cause the Alligator River National Wildlife Refuge to be highly disconnected from the mainland of North Carolina, complicating movement for a large portion of the red wolf population from their current habitat range. Compared to current habitat connectivity, the results show that while the overall route of movement by wolves may not drastically change, several bottlenecks caused from interstate and highway density, urban sprawl, and sea level rise flooding may impair movement to some extent. These barriers can be mitigated by constructing highway under- or overpasses and planting greenway corridors to make migration safer and easier for the wolves in the future.
Type
Master's project
Department
Nicholas School of the Environment and Earth Sciences
Subject
Connectivity
Habitat
Red Wolf
Wildlife Management
Sea Level Rise
Urban Growth
Permalink
https://hdl.handle.net/10161/6791
Citation
Desmul, Lindsey (2013). Habitat Connectivity and Suitability for Canis rufus Recovery. Master's project, Duke University. Retrieved from https://hdl.handle.net/10161/6791.
Collections
More Info
Show full item record