ASSESSMENT OF THE EXISTING MPA NETWORK WITHIN THE CORAL TRIANGLE 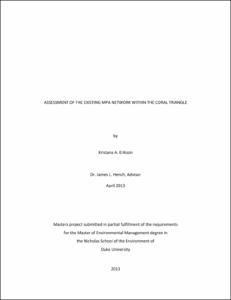 View / Download
2.1 Mb
Date
Author
Erikson, Kristana
Advisor
Hench, James
Repository Usage Stats
309
views
561
downloads
Abstract
This study identifies the present level of coral and mangrove protection existing in the Coral Triangle, utilizing current data from the Coral Triangle Atlas database and a process called “gap analysis,” which allows for the identification of underrepresented ecosystems and habitats. In addition, two different techniques to evaluate connectivity between existing MPAs were employed. The unparalleled biodiversity of the Coral Triangle region, along with its importance to the people who live there, make it a rich and valuable resource that must be preserved. In response to mounting threats to these resources, President Susilo Bambang Yudhoyono of Indonesia proposed the Coral Triangle Initiative on Coral Reefs, Fisheries and Food Security (CTI-CFF) in August 2007, calling for a multilateral partnership between the six Coral Triangle (CT6) countries. These six countries subsequently agreed to the Regional Coral Triangle Initiative Plan of Action, which sets five key goals and calls for the development of a region-wide network of marine protected areas (MPAs), to be established and fully functional by 2020. Up to date analysis of the changing levels of protection throughout the Coral Triangle is needed in order to measure progress and enable the CT6 countries to develop strategies to reach their conservation objectives on schedule. The result of the current analysis demonstrates that while the connectivity between the majority of the MPAs in the Coral Triangle is sufficiently proximate to another reserve to facilitate larval exchange, only Timor-Leste has at least 20 percent of its coral reef area within no-take MPAs, and none of the six Coral Triangle countries have met the 20 percent target for mangrove forests. Clearly, the CT6 need to establish vast areas of new MPA networks, if they want to preserve coral and mangroves effectively. Malaysia, Papua New Guinea, the Solomon Islands, and the Philippines all need to increase the area of MPAs that coincide with the location of coral reef tracts, and each of the six countries need to do so with respect to mangrove forests.
Type
Master's project
Department
Nicholas School of the Environment and Earth Sciences
Subject
"Coral Triangle" "marine protected areas" "MPAs" "gap analysis" "connectivity"
Permalink
https://hdl.handle.net/10161/6794
Citation
Erikson, Kristana (2013). ASSESSMENT OF THE EXISTING MPA NETWORK WITHIN THE CORAL TRIANGLE. Master's project, Duke University. Retrieved from https://hdl.handle.net/10161/6794.
Collections
More Info
Show full item record